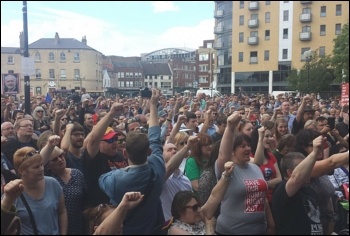 The largest political rally Hull has seen in the last 20 years was held on 30 July, with over 3,000 people attending to show their support for Jeremy Corbyn.

The city has seen a serious lack of investment for many years and has been hammered by austerity. This has resulted in a shrinking public sector, high unemployment and a lack of funding in front-line services. It was, therefore, with great anticipation that people waited for Corbyn. A politician that understands working class struggles and is putting forward an anti-austerity programme.

There was an upbeat and joyful atmosphere throughout the day. Solo artist Joe Solo had the crowd holding up their hands and singing "¡No Pasarán!" along to his ballad about a young working class lorry driver from Hull who volunteered for the International Brigade and fought the fascists in the Spanish Civil War.

Labour Party activists, MPs and trade unionists addressed the crowd, showing their support for Corbyn. A particularly passionate speech was given by Leeds MP Richard Burgon who fully supports Corbyn and his policies.

Notable by their absence were the three Hull MPs, Karl Turner, Alan Johnson and Diana Johnson, who were all part of the 172 MPs that backed a vote of no confidence in Corbyn.

Corbyn first attended a local restaurant for lunch, where he met with members of Hull's Kurdish community, before making his way to the stage to rapturous applause.

The turnout in Hull was phenomenal and over 170 copies of the Socialist were sold. Leafleting at the event led to a very well attended public meeting on 1 August.