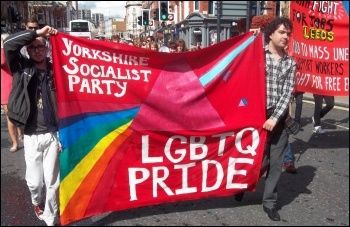 Leeds Pride is the biggest free Pride event outside London and is an important place for the Socialist Party to show our support to the LGBTQ community. Our petitions called on the NHS to fund HIV preventative drug PrEP and were met with enthusiasm, particularly from people who currently take the drug but have to pay £400 for it.

We also had good discussions with people signing our petition, many of who saw that cuts to the NHS were part of the reasons PrEP is not being funded.

On the march itself we were met with support from the trade unions and towards the end we set up an alternative stage to allow people the opportunity to talk about why they are marching and about the battles still facing the LGBTQ community.

Our stage was well received and we had some people come up and say a few words on the open mic (and in one case sing a song). It was good to see that a large number of people also agreed that Pride needs to be political.

Our intervention was important as we were the only group campaigning on an LGBTQ specific issue and highlighting that equality for the community is still far from won.