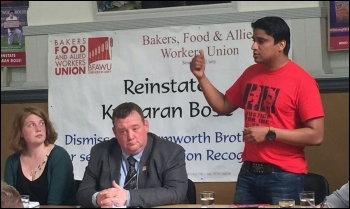 Trade unions like the bakers' union (BFAWU) exist to defend and extend the rights of workers.

This is why Samworth Brothers, one of Leicestershire's biggest food manufacturing companies, is trying to bully their employees at Kettleby Foods into backing-down from their perfectly reasonable demands for collective bargaining rights.

Having unfairly dismissed Kumaran Bose, the one worker who helped recruit more than 50% of his fellow factory workers to the BFAWU, Samworth management have now stepped up the intimidation of their employees.

Workers are presently having to sit through management briefings where they are told that while it is their democratic right to join a union, to do so would be to act against the best interests of their employer by acting to "drive a wedge" between management and workers. In a further disgusting and bullying attack on workers, template letters are now being circulated by shop floor bosses to persuade suspected union members to leave the union.

The form encourages employees to fill in the blank spaces on the letter, detailing when they joined the union, when they plan to leave the union, and to put their signature to a statement that says they "do not wish for BFAWU to be recognised at Kettleby Foods for the purposes of collective bargaining."

This intimidation is being further supplemented by a company petition, circulated by floor managers, calling for workers to disown BFAWU.

In a serious display of contempt for their employees, the petition has the names of all workers' printed on it already and workers are then asked by their line managers to sign it. If the workers don't sign they are invited into the manager's office to sign the petition!

In a bid to encourage the management to engage with their employees in a more democratic fashion, BFAWU has been forced to take its campaign to the streets to try to bring public pressure to bear upon this decidedly anti-union company.

On 30 July a protest was held in Leicester and other cities outside Marks and Spencer to encourage the public to boycott products sold there that are produced by Samworth Brothers.