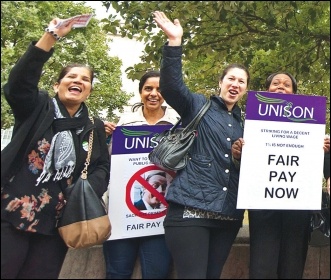 There has been a lost decade for wage growth. Workers will have realised this, many getting pay freezes while the cost of living keeps on climbing up.

Figures released by the Office for National Statistics show the income of working households is down £400 a year on pre-2008 levels. The average hourly wage for both graduates and non-graduates fell by 20% between 2008 and 2013.

The forecast doesn't show much improvement, either. While inflation is still at historically low levels, it has increased and will continue to increase over the coming months. This will eat into wages, meaning we will feel the squeeze even more.

The pound is weak so imports are costing more. This hike in costs for the companies is being passed on to consumers. Food prices will rise. Railway companies are chomping at the bit to increase fares.

We desperately need a pay rise! In response to the rise in inflation, the Trade Union Congress has called for an increase in government spending on infrastructure to help the economy. However, they have said nothing about their policy of a £10 an hour minimum wage.

Bosses are using the excuse of the Brexit vote and uncertainty in the market to keep wages down while prices rise. But we can't wait any longer!

We can't afford another lost decade. The rich have doubled their wealth while workers continue to suffer. We need to organise to fight for our share.

Capitalism and its representatives offer no way out - it's cuts and crisis forever. Recent successful strikes by low-paid workers show what is possible. We need this type of fightback across the board.