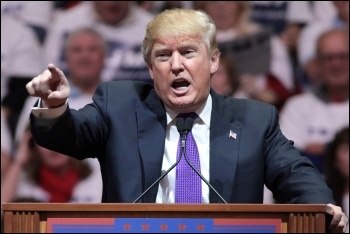 Tom Crean, Socialist Alternative (US co-thinkers of the Socialist Party)

The presidential election campaign is heading into its final phase now that the Democratic and Republican conventions are over. The result was the anointing of the two most unpopular major party nominees in living memory, although Donald Trump is right now definitely winning the unpopularity competition.

Many workers, women, black people, Muslims and immigrants are legitimately afraid about what an unhinged Trump presidency would mean. But millions of people are also sickened by the choice at the top which is contributing to significant support for both left-leaning Jill Stein of the Greens and Gary Johnson of the right-wing Libertarians.

This presidential contest has witnessed an upheaval against the political establishment of both parties not seen in decades.

In particular there was the mass support for Bernie Sanders' call for a "political revolution against the billionaire class" - fuelled by pent-up anger at unprecedented inequality and the neoliberal attacks against working people over the past 30 years.

Such support showed the potential for a new political force representing the 99%, independent of corporate control.

Donald Trump's campaign, in a distorted way, has also channelled anti-establishment and working class anger but is using that to further a nationalist and racist, right-populist agenda, which is deeply hostile to the interests of working people and the oppressed.

At the Republican National Convention, Trump focused on a "law and order" message playing on fears of racial strife and terrorism. But he also demagogically talked of standing up for the "forgotten men and women" in working class communities devastated by the loss of better-paid industrial jobs.

Since then he has come out in favour of changes to the tax code that would represent a further shift of wealth to the 0.01% showing how hollow the "I feel your pain" rhetoric really is.

The liberal media's frequently crude attempts to dismiss the white working class as one reactionary mass are fundamentally wrong.

For one thing a large section of the white working class rejects Trump, for various reasons or simply because they don't believe a billionaire blowhard actually has their interests at heart.

Many of the poorest white Americans are completely alienated from the political process and will not vote. And of those inclined to support Trump there is more than one motivation. Many are looking to punish the establishment, of which Hillary Clinton is such a consummate representative.

There is a reason why Bernie Sanders crushed Donald Trump in every poll for months and that is because a section of the people prepared to consider Trump, given a choice, would have opted for a clear pro-working class and anti-racist candidate. This shows the danger of trying to oppose right populism with a candidate of the status quo like Clinton.

There should be no illusion on this score: whether Trump wins or loses, a right-wing force is emerging in the US which can only be defeated by a mass movement of working people and the oppressed.

Significant sections of the ruling elite have their own reasons for going after Trump. First of all they are not happy with his 'isolationist' position in foreign affairs, including his opposition to trade deals or talk of pulling back from Nato commitments.

Secondly, they have concluded that Trump is incapable of 'pivoting' after the primaries to be more 'presidential'. They see his attacks on one group after another and his completely unscripted and undisciplined approach as potentially seriously damaging the presidency, further undermining the credibility of the political system. Their worry - not without reason - is that a President Trump could unleash civil unrest on a scale not seen since the 1960s and 70s.

As long as Clinton, clearly now the favoured candidate of Wall Street and the corporate elite, can keep the focus on him, her position strengthens. The danger for Hillary is if the focus returns to her. After the FBI report on her use of a private email server during her time as Secretary of State the polls showed her neck and neck with Trump.

Besides Clinton's "stop Trump" message she has also talked about inequality and reigning in Wall Street to appeal to Sanders supporters. But none of that is binding on the Democrats if they win. The ruling class would like a President Clinton who has made as few promises as possible but this is also a dangerous approach in dealing with Trump who is clearly prepared to make a lot of promises.

From the start of Bernie Sanders' historic campaign, Socialist Alternative argued that he should have run as an independent candidate. By accepting the framework of the rigged Democratic primary system, he set the stage for the betrayal of the 'political revolution'. In the end he tragically gave his fulsome endorsement to Hillary Clinton, who represents Walmart and Wall Street. But if Sanders was standing all the way to November's election there would be the potential for a left vote on a historical scale.

But despite the serious limitations of Sanders' campaign, millions got an education in how far the political system and particularly the Democratic establishment were prepared to go to prevent Sanders winning. Why? Because as a party which serves the interests of corporate America it is opposed to a pro-working class programme.

Despite the efforts of the corporate media to keep the story under wraps, the Democratic convention in Philadelphia was the most contentious in 50 years.

The walkout of half or more of Sanders' delegates on the Tuesday night of the convention reflected the anger at the way the primary had been stacked against them which was all brought back by the Wikileaks data dump.

But it also reflected the disbelief at Hillary's choice of Tim Kaine, a supporter of bank deregulation, as a running mate all while talking about 'party unity'. 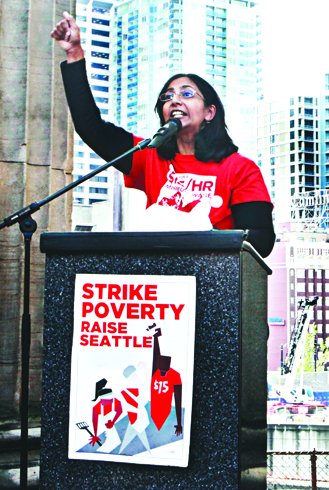 Socialist Alternative was proud to have played a role in helping to organise this walkout which was an affirmation of the political revolution. But even among those who walked out there was a clear differentiation between those who still believe the Democratic Party could be reformed into a party which represents the interest of the 99% and those who, like us, believe this is impossible and have decided to support Jill Stein as the best way to continue the political revolution in the November election.

Stein is now getting up to 5% in some polls while Johnson is polling near 10%. Both campaigns are feeding off the desire for more political choice than the dysfunctional two party system offers but they also point in fundamentally different directions.

We utterly reject the argument that a 'vote for Stein is a vote for Trump'. We fully recognise that millions who reject what Clinton represents will in the end hold their noses and vote for her to stop Trump. But we see the question of laying the ground for a new political force as primary.

40 years of neoliberal Democratic policies helped drive a big section of the working class into the arms of utter reactionaries. The solution to this is not to keep supporting those same Democrats but to build our own political party.

We must begin to prepare for the major social struggles that are going to be unleashed in the coming years.

In Seattle, Socialist Alternative member Kshama Sawant proved the effectiveness of independent politics by winning election and reelection as a council member, as well as winning the first local $15 minimum wage in the country.

We also aim, alongside others, to continue to demonstrate in practice what a new independent politics based on determined struggle and directly challenging the corporate political establishment can achieve.