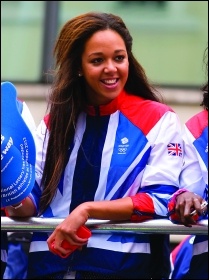 Britain's second-place finish in the Olympic table has been used widely by the establishment as a show of the greatness of British sport and successful investment strategies. But the reality is far from this image.

This reveals serious problems in how sport is funded and organised, who controls the funds, and what sporting organisations seek to achieve.

Millions, young and old, will have been inspired by Mo Farah floating down the track, or Laura Trott darting round the velodrome. But the opportunities for working class people in Britain to take part in basic sports - let alone those requiring equipment and facilities - are worse than ever.

Swimming is part of the national curriculum. Schools are meant to ensure children can swim 25 metres unaided by eleven. Despite this, figures from 2014 found more than a thousand primaries didn't provide any lessons, and 45% of children start secondary school unable to swim.

Previously, the Sports Council - motto 'sport for all' - directed and governed sport in the UK. In 1994 the Tory government replaced it with UK Sport, which concentrates funding on top-end professionals.

The idea behind this came from Olympics chief Seb Coe. He saw financial support for elite sport as the overriding priority, putting local authorities in charge of grassroots sport.

Sports funding elitism has even reached a stage where some athletes were denied selection for Rio despite having qualifying times - because they weren't deemed 'medal winners'.

The Socialist Party campaigns for the funding, facilities and time for everyone to take part in sports. Reverse cuts and sell-offs of school and community facilities. For investment in free, high-quality sport aimed at participation at every level.

For decades of history the super-rich class has attempted to block working class people from sports. The famous 'mechanics exclusion clause' was adopted by many early amateur sports bodies in the 19th century, including rowing and even athletics. Its job was to keep out the successful new breed of working class professional athletes.

This excluded not only those who made a simple living from sports, but also anyone "who is or has been by trade or employment for wages a mechanic, artisan or labourer." Later these sports, predominately Olympic, allowed workers to take part - but banned 'professionals', meaning only those with an independent income could train full-time.

Despite this, many workers throughout the 20th century continued to pursue their chosen sport to the highest level. This often involved training multiple hours a day around full-time manual work. Today, low wages and long working hours are still an insuperable barrier to many aspiring athletes.

This would allow everyone to play and take part to whichever standard they wish - just for fun, to keep fit or to become a professional athlete.