Workers' unity and socialist struggle to fight racism and Islamophobia

International outrage has resulted from the decision of over 20 town mayors in the south of France to ban from beaches the wearing of 'burkini' swimsuits, on the spurious grounds of 'inciting terrorism' and 'threatening public safety'. Despite a court decree rejecting the ban as unconstitutional, the mayors say they will ignore the ruling. Judy Beishon reports on how the issue has become the focus of an ugly backlash to the recent terrorist attacks in France. 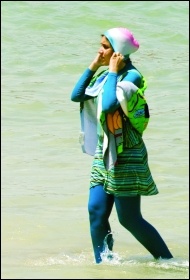 The mayor of the French Riviera resort of Cannes, David Lisnar, was the first to issue a temporary ban in August on the wearing of burkinis on the beach. Over 20 other mayors then made similar orders.

The decrees were worded against 'beachwear showing religious affiliation' but the burkini - a swimsuit covering most of the body - was clearly the main target. In Lisnar's words, it was a "symbol of Islamic extremism" that "could risk disrupting public order while France was the target of terrorist attacks".

Very few burkinis were actually being worn on French beaches. These edicts and subsequent police actions were blatant propaganda-motivated attacks on individual Muslim women who were trying to relax by the sea.

Coming from mayors from both the two main pro-capitalist parties in France - the right-wing republicans (UMP) and some from the so-called 'Socialist Party' of president Francois Hollande - these draconian orders are acting as a diversion from the complete lack of any real way forward these politicians have on preventing terrorism or on turning around the declining French economy.

Government ministers took opposing positions on the events. Prime minister Manuel Valls was among those supporting the bans, exacerbating divisions in his party, while education minister Najat Vallaud-Belkacem dryly pointed out: "There is nothing to prove that there is a link between the terrorism of Islamic State and what a woman wears on a beach".

Perhaps with an eye on the degree of disbelief and condemnation internationally, a test court case in France on 26 August suspended the ban in Villeneuve-Loubet.

A number of right-wing mayors vowed to keep their bans in place despite this ruling, and the mayor of Villeneuve-Loubet, Lionnel Luca (a Republican National Assembly member) made it clear he will continue to use the issue to whip up racism and division. He declared that the ruling would boost "rampant Islamisation" and that "far from calming, this decision can only heighten passions and tensions, with the risk of trouble we wanted to avoid".

It is the words and actions though of the burkini-banning, bigoted pro-capitalist politicians that are inflaming tensions. Through scapegoating all Muslims they create a climate in which there will be increased alienation of young Muslims and more incidences of physical and other racist attacks on Muslims.

Also, far from reducing the influence of the very small minority of jihadist-leaning Islamists, they give them an opening to pose as the defenders of the rights of Muslim women who are being fined for what they wear.

In addition, banning burkinis is likely to increase their use. How many people had even heard of a burkini, least of all worn one, before French mayors launched their attacks? But now the burkini's Australian originator says that sales have risen.

After former French president Nicolas Sarkozy imposed a ban on full-face veils in public places in 2011 it was estimated that the number of women wearing them increased. And an untold number may have stopped leaving their homes; and now many may no longer go to beaches.

The outrageous, polarising position of Luca and many others who have waded into this issue is doubtlessly with a view to the 2017 presidential and legislative (parliamentary) elections - playing for votes by exploiting fear of globalisation, immigration and terrorism. 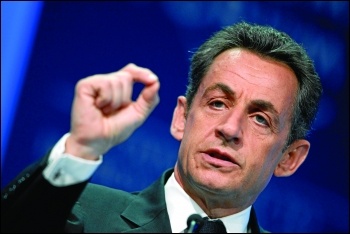 A prime example is Sarkozy, who wants to be reelected as president next year and is trying to draw votes away from the National Front led by Marine Le Pen, who fully supports the burkini bans.

Sarkozy strongly supported the bans, calling burkinis "a political militant act, a provocation. Women who wear it are testing the resistance of the Republic". He declared he would extend the bans nationally and also widen the ban on headscarves in schools and public sector institutions to encompass universities and all workplaces.

Aside from the issues of 'public order' and countering terrorism (and passing over the spurious issue of public hygiene that has been raised!) a major pretext of the burkini bans has been to uphold women's rights and promote secularism.

Some people who support the bans in France - especially on the left - do so due to these two issues, recognising that dress codes involving the covering of women's bodies can be a symbol of control by men over women.

Certainly, no woman should be forced against her will by her family to wear, or not wear, any particular item of clothing, whether for religious or moral reasons, in any country of the world.

But state-enforced laws either to uncover or cover-up won't aid the struggle for this basic right; rather they promote division and reduce the right of individual women to make their own choices about what they wear and do.

Secularism in state institutions must be defended but so should the right of any individual to practise a religion and wear what they choose, as long as they don't try to impose their beliefs on anyone else.

In any case, women don't just wear headscarves, tunics or burkinis because of religious observance; for some it is for reasons of tradition, culture or identity; or to avoid having their bodies stared at; or simply to protect their skin from the sun. For others it is to express defiance against racism, or to demonstrate their opposition to the imperialist wars that have killed hundreds of thousands of Muslims.

That the pro-ban capitalist politicians in France are not in reality motivated by women's rights is shown by their support for savage austerity measures - attacks on pensions, jobs, terms and conditions - that women are at the sharp end of.

The central route to dramatically improving the lives of Muslim women in France and all other working class and middle class women, lies through reversing austerity and implementing a programme of creating secure jobs on good, equal pay, increasing benefits, and providing genuinely affordable housing and low cost childcare.

After the terrible 14 July slaughter of 86 people in Nice when a lorry driver drove into crowds, the French government extended the state of emergency it introduced after the Paris terrorist attacks last year.

But this won't stop further atrocities - as was shown just a week later when Isis claimed responsibility for the brutal killing of a catholic priest in a church near Rouen.

The extra police powers and the thousands of soldiers placed on the streets are an attempt by the government to appear to be doing something - an attempt in vain, as Hollande's very low popularity ratings bear witness.

The special repressive measures do however serve one purpose for the government; they can be used and have been used against demonstrators opposing government policies.

For example, protests by environmentalists have faced restrictions, as have some participators in the mass movement earlier this year against a new employment law.

That movement involved millions of workers from the public and private sectors taking repeated rounds of action and protests against a law that opens the door to longer working hours, less job security and other measures that amount to a bosses' charter at the expense of working people.

It included oil refinery blockades; strikes on the railways, at nuclear power stations and by refuse workers; participation by young people in secondary schools and universities; and the Nuit Debout discussion gatherings in city centres. Concurrently there were hundreds of strikes breaking out over other issues: pay, or terms and conditions, by air traffic controllers, pilots and other workers.

It is also through developing such united, mass workers' action, along with workers' political representation - whether in the Middle East, France or elsewhere - that the sponsors of terrorism and the conditions that breed it will be fought.

The devastation in Iraq and Afghanistan during and after the brutal western imperialist occupations created breeding grounds for escalating terrorism.

Add that catastrophic picture - and the war in Syria and the French military interventions in Africa - to the discrimination and poverty suffered by many Muslims and other sections of the working class in France, and the underlying background to the terrorist atrocities in France takes shape.

The sponsors of far-right reaction and terrorism feed off discontent, anger, lack of hope, inequality, discrimination and poverty.

Right-wing political Islam in the form of organisations such as Isis must be strongly countered, both because of the atrocities committed in their name and their reactionary ideology which is so profoundly against the interests of the working class and women's equality.

An overwhelming majority of Muslims condemn terrorism, and at present are the majority of victims of it across the globe. Even in Nice, around a third of those mowed down by the lorry driver were Muslim.

A tenth of the working population of France is unemployed, around 17% for those from immigrant backgrounds and higher still among youth. With zero economic growth in France in the April to June quarter this year, the sickness of French capitalism - as with capitalism across the globe - is clear.

The answer to this lies not in state smokescreen measures that worsen racism and division, but in workers uniting in action, and laying the basis for the building of a new, genuinely socialist, party of their own to counter racism, sexism and all the austerity-driving acts of the government.