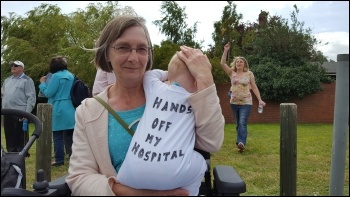 Citing safety, the local hospital trust decided to close Grantham Hospital A&E between 6.30pm and 9am from 17 August, temporarily, so doctors can be moved to the trust's A&E departments at Lincoln County Hospital and at Pilgrim Hospital, Boston.

"The loss of a night time A&E service to the 120,000 people living or working in the Grantham Hospital area is not acceptable given many residents have no means of travelling to an alternative A&E unit.

"This service has now gone and local lives are more at risk. Other non-life threatening, but important, medical care at night has been lost for sick or injured patients. I personally witnessed two boys on the evening of 17 August arrive with fractures who had to face a journey to Lincoln Hospital to receive any form of treatment, without any appropriate stabilising medication or painkillers. Had their injuries been life threatening and require medical intervention immediately they would be dead.

"People unable to travel elsewhere will be forced to wait in the open in an unheated, insecure unsheltered location for help to arrive. If they are critically ill and need immediate attention in a worst case scenario they could die locked out of the hospital without medical assistance. The father of one young boy was quoted 1.5 hours for an ambulance - this is a totally unacceptable risk."

Socialist Party members supported the protest and Gary Freeman, an East Midlands member of Unison's health service group executive, addressed the protest giving his full support to their campaign and explaining how the attacks on the A&E service are part of a cuts agenda.