From The Socialist newspaper, 7 September 2016 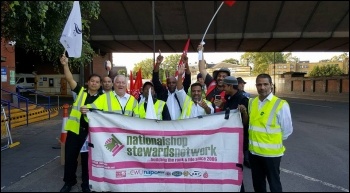 London bus workers at Tower Transit in London took a second 24-hour stoppage on 6 September over the imposition of roster changes, pay and bullying bosses. The strike followed failed talks at Acas and involved over 1,000 drivers, engineers and controllers at three depots across London. The previous 24-hour strike on 26 August (see issue 914) led to services operating out of the Atlas Road bus depot in Park Royal, the Westbourne Park bus garage and the Lea interchange bus depot affected. All three depots were once again involved in the second stoppage which followed mounting frustration among workers, who are angry over a lack of consultation over roster changes which are leaving them out of pocket, as well as the non-payment of correct rest day working pay rates. There will be a further 24-hour strike on 12 September.

Unison members across Scotland's 20 further education colleges took strike action on 6 September. "Striking is a last resort, but we will support our members in every way possible to achieve the same fair and reasonable pay settlement as already paid out to teaching colleagues," said Unison Scotland organiser John Gallacher. Teaching staff received a flat-rate rise of £450 in May, but most support staff have been offered just a £230-a-year flat rate increase. Now workers in administration, admissions, funding, catering, cleaning, advice and security, together with classroom assistants, technicians and other support workers, will stage the country's first national strike in the sector next week as they seek fair pay and parity with their lecturer colleagues.

Refugee crisis: for homes, jobs and services for all

Women lose out in the workplace

Premium pay cuts are not just any cuts, they are M&S cuts