Link to this page: https://www.socialistparty.org.uk/articles/23536

Labour loses in Sheffield byelection but Corbyn isn't the problem 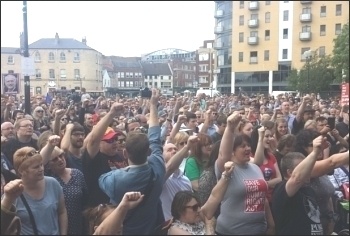 On 8 September Labour suffered a shock council by-election defeat in Sheffield that was seized upon by the right wing of the Labour Party, locally and nationally, to say once again that Jeremy Corbyn is unelectable.

The Liberal Democrats, who had come fourth in the ward in May, won the Mosborough seat by over 400 votes with a dramatic 32% increase in their share of the vote. Labour's vote fell 9%, the Tories by 8% and UKIP 10%.

Angela Smith, the Blairite MP for Penistone and Stocksbridge (in north Sheffield and Barnsley), quickly blamed the defeat on 'traditional Labour voters' in Mosborough turning their backs on the party due to Jeremy Corbyn's leadership.

But the real reasons for Labour's loss in Sheffield are entirely different. The Labour candidate was a vehement anti-Corbynite who had tweeted and retweeted against Corbyn, even quoting Denis Healey and Hugh Gaitskell against him!

The Mosborough ward is in Sheffield South-East constituency where Clive Betts is the Labour MP. Betts recently moved the motion at the Parliamentary Labour Party meeting that they should elect the shadow cabinet, to undermine Jeremy Corbyn's leadership. The constituency has benefitted little from the Corbyn membership surge and so had few active members on the ground.

Enter the Lib Dems. Although discredited nationally through Tory coalition and locally through Nick Clegg (a Sheffield MP), their candidate lives in Mosborough and had been a Lib-Dem councillor for the ward from 2008 to 2012, which contrasted with the Labour candidate, who lives in Stocksbridge, 16 miles away at the other end of Sheffield.

This reinforced the view that Labour takes working class votes for granted. Interestingly, the victorious Lib-Dem candidate has spoken out since, saying that she found on the doorstep that "Jeremy Corbyn was more popular than Angela Smith wants to admit. I certainly do not agree that is why I won. Most people told us that they never saw Labour, only at election time and they felt taken for granted. One lady told me that she had been canvassed by Labour, who when she told them she was voting for me, was told 'You cannot vote Lib Dem, you live in a Labour area'.

"And that is the arrogance of this Labour Party here in Sheffield - Corbyn is not as unpopular as they would like you to think. They need to look very closely at their own leadership in Sheffield."

Obviously the Lib Dems have their own agenda, but it is true that the Sheffield Labour council has slavishly carried out the Tory government cuts for the last six years and has a reputation for not listening. So far from Jeremy Corbyn 'losing' the by-election, years of New Labour policies and attitudes both nationally and locally were the main factors.