Editorial of the Socialist, issue 916 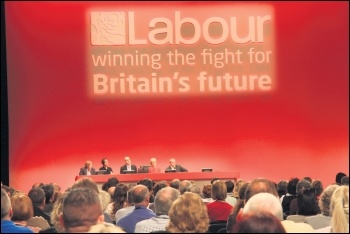 Labour Party conference once had vibrant debates, but over the last 30 years turned into an anodyne courting of the capitalist media, photo by Scottow (Creative Commons)   (Click to enlarge)

Leaders of the Labour Party's right wing, realising they have lost their battle for Jeremy Corbyn to be defeated in the present leadership contest, are desperately seeking other ways to entrench their position in the next phase of the party's civil war. The right-dominated Parliamentary Labour Party voted 83% to 17% for a proposal to stop Jeremy Corbyn from being able to choose his shadow cabinet and instead return that power to themselves. Meanwhile some on the left have been weighing up whether it will help them to counter the right if they propose an increase in the size of Labour's National Executive Committee (NEC).

Any such proposals have to be approved by the NEC and then go to the party conference, which convenes on 25 September. Does this mean that the party is fundamentally democratic and that the large, pro-Corbyn influx will make its mark this year?

Certainly there are likely to be more Corbyn supporting delegates this year, though their number will again be limited by the requirement of needing 12 months of party membership before the closing date for delegate 'applications', in order to qualify. But then, after that hurdle, when it comes to trying to influence Labour policy, "there are many hurdles to getting policy submitted, let alone discussed and voted on, let alone passed," as the Momentum NHS group puts it.

There was a time when Labour's conference had vibrant debates on key political issues, often challenging and opposing the position of the party's leaders. But over the last three decades, as the leadership increasingly sought to fend off opposition to pro-austerity policies, it was turned more into an anodyne courting of the capitalist media. Set in train by Tony Blair in particular, the conference was reduced virtually to a consultation forum that wouldn't hinder the leadership's pro-big business agenda.

The conference's policy-making powers were largely transferred to much smaller 'policy forums' headed by the National Policy Forum (NPF). Conference debates were carefully managed to keep opposition at bay on certain key issues, with the NPF trying to set the parameters. When unwelcome motions were agreed they were simply ignored, such as those to renationalise the railways and Royal Mail. The leadership decided policy, not the members, who were mainly just invited to submit opinions on the order of priorities.

This year many right-wing controlled CLPs (Constituency Labour Parties) may have avoided even organising a meeting to discuss proposing a resolution to the conference. This was made easier for them by the NEC's undemocratic ban on all 'normal' CLP and branch meetings during the Labour leadership contest. Resolutions that do make it to the conference can then face being discarded by the Conference Arrangements Committee for not satisfying the requirement to be on a "contemporary" subject or for being on an issue covered in the NPF's reports . Are the rest then put to the conference? No, because the conference delegates can only choose eight topics for discussion (four from CLPs and four from trade unions), and all the resolutions on those topics have to be composited into just eight - losing along the way many of their clauses, and eliminating all resolutions on topics not selected.

As well as democracy being seriously eroded, so was the influence of the organised working class. The trade unions created the Labour Representation Committee in 1900, which became the Labour Party, as a political voice for the working class. However, in 1993, responding to insistent demands from the capitalist class, Labour leader John Smith began a process of preventing trade union representatives from being able to cast votes in the Labour Party using the weight of their full membership - the 'block vote'. He introduced One Member One Vote (OMOV) for the selection of parliamentary candidates, deliberately to undermine trade union influence.

Then Blair, in 1996, reduced the voting weight of affiliates (mainly trade unions) at party conference from 70% to just 50%. It had been 90% up to 1992. Further erosions to the votes of trade unionists within the Labour Party structures took place over the years, up to the Collins Review in 2014 when Ed Miliband did away with the 33% voting weight that trade unionists had in Labour leadership elections. Instead, individual trade unionists could become 'affiliated supporters', with only very limited rights within the party.

Miliband argued that his changes would reverse the decades-long decline in Labour's active support base. When moving them he said: "If you vote for these reforms you will be voting for Labour to be a movement again." But it was Labour's policies of privatisation, cuts, the public sector wage freeze and other attacks - continued under Miliband - that were preventing Labour from becoming 'a movement again', as the anti-austerity Corbyn surge has clearly shown.

Now membership of the party has rapidly risen to be the highest since the 1970s, but today's members have a party structure that is far less democratic and trade union based than in the 70s. The anti-democratic tide needs to be turned back. For a start this should mean an end to right-wing motivated exclusions and suspensions of individuals and even of whole CLPs like Wallasey and Brighton, and allowing those who have been expelled for having socialist ideas to rejoin; no more temporary bans on holding local meetings; a reinstatement of mandatory democratic selection for parliamentary candidates; and the national conference turned into a forum for democratic debate and policy making.

Also necessary is reinstating the trade unions' right to collective representation and a role in the party's decision-making processes commensurate with their size. In addition, while there are still residues of the federal structure formed in 1900 (as well as 14 affiliated trade unions, Labour presently has 22 other affiliated organisations), this should be expanded and strengthened by inviting back in, as affiliates, socialist organisations like the Socialist Party and other anti-austerity formations that have previously been excluded for campaigning too hard in working class interests for the Blairites to tolerate.

Jeremy Corbyn has regularly said that he wants to see democratisation of Labour's policy-making process, with empowerment of rank and file members, which is very welcome. For the right wing it's another story: the history of recent decades shows their desire and trajectory for the very opposite. While the right no doubt would like to remove all Jeremy Corbyn's supporters from the shadow cabinet, Jeremy himself aims to keep to a moral high ground when for instance he says, on the BBC's Question Time, that he hopes for a shadow cabinet that is "balanced and is extended to all wings of the party and we will get together to take on the Tories, and what they are doing to health, to education."

But the burning problem is that Labour's Blairites when in government made many similar attacks on health and education to those of the Tories, and would again, given the chance. They represent the interests of capitalism in the Labour Party and would try to sabotage any measures taken against big business. Only those MPs willing to accept Corbyn's anti-austerity programme should have the Labour whip, never mind being part of the shadow cabinet.

The onslaught of 'warnings' across the capitalist media that Labour can only ever again win a general election if it moves rightwards in order to take votes off the Tories and Ukip are the exact opposite of the truth that they try so hard to conceal. Yes, Labour will have to take votes from other parties and inspire support from would-be non-voters - and it once had enough of those votes when it was still seen as acting even slightly in the interests of ordinary people.

Now a tremendous opportunity has arisen as a result of the Corbyn surge, to bring Labour back to power but on an entirely different, attractive basis. This can be achieved even if the proposed constituency boundary changes go ahead, which disadvantage Labour. But the foundation for this transformation needs to be democratic debate on policy and choosing manifesto pledges such as reversing all council cuts, fully restoring the NHS, a £10 an hour minimum wage and significantly increasing public sector wages. The Socialist Party will also call for a socialist programme of taking into public ownership the large corporations that supply our most vital goods and services.