Disabled People Against the Cuts (DPAC) called a week of action, 4-10 of September, called 'Rights Not Games' to coincide with the beginning of the Paralympic Games. 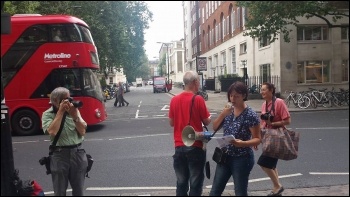 Socialist Party members joined the protest in London on 6 September in solidarity with the demand for equal rights and reversal of cuts. We sent video selfies supporting the action, sold the Socialist paper and gave out a leaflet.

A Socialist Party member spoke at the protest saying: "We condemn the establishment's hypocrisy of using the Paralympics to present themselves as inclusive, when with the other hand they impose austerity that's led to over 2,000 deaths of disabled people! We also say that there is an anti-austerity mood expressed around the support for Jeremy Corbyn. It is crucial for disabled people to finally have a political party that 100% opposes austerity and fights for the workers!"

On 6 September Disabled People Against the Cuts (DPAC) North East and Cumbria assembled at the Sage Gateshead for our 'Rights Not Games' protest. Those attending were a diverse group uniting together to raise awareness in support of disabled rights and against continuing benefits cuts that disabled people are facing under this Conservative government and previous governments.

The introduction of the Work Capability Assessment is so derisory that thousands have died within six weeks of being assessed and told they are able to work. The scrapping of the Independent Living Fund for severely disabled people, with funds transferred to local councils, but not ring-fenced, so individuals are not getting the level of support they previously received, often ending up isolated and housebound.

These are just some of the measures that are affecting many of the most vulnerable people in society. This latest crippling round of austerity is, as Jeremy Corbyn has said, a political choice, not an economic necessity.