From The Socialist newspaper, 22 September 2016 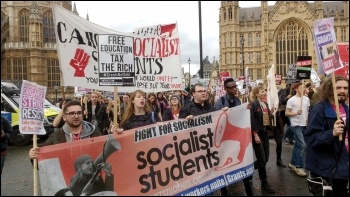 Since the financial crisis of 2007-2008 and after six years of crippling Tory austerity, students find themselves facing the prospect of being worse off than the previous generation.

This has undoubtedly led to an increase in political activity with movements such as #BlackLivesMatter, rent strikes, strikes over pay, occupations taking place and demonstrations against racism, the prevent agenda, cuts, homophobia, sexism and war happening on campuses across the country.

Increased austerity and the threat of the higher education white paper looming mean that struggle on campuses is set to reach fever pitch.

Socialist Party members have been at the forefront of many of these struggles.

We have also been some of the strongest defenders of Jeremy Corbyn and more importantly the politics and ideas that have led to the movement behind him.

After suffering under a zero-hour contract for five years with no rights as a care worker; after experiencing health issues and seeing the NHS and public services decimated by cuts; after seeing massive rises in tuition fees and the increased marketisation of my education - I can see the need to fight back. I can see the need for real socialist change.