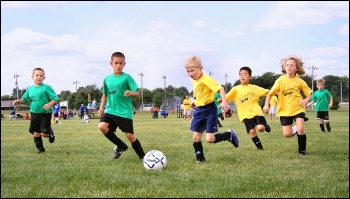 A 2008 survey showed only half of girls and two thirds of boys did the recommended daily amount of physical activity. Schools and sports clubs have faced big funding cuts, which wil only exacerbate the problem, photo by Tysto (Creative Commons)   (Click to enlarge)

"Teresa May's first hurdle was obesity, and she has failed" was the headline of one of a series of articles slating the newly announced 'obesity strategy,' which downgraded even the limited proposals put forward by Cameron.

The National Child Measurement Programme for 2014-15 suggested that the problem increases with age, with 33.3% of ten to eleven year olds either overweight or obese as compared to 21.9% of four to five year olds.

Reflecting a lassez-faire approach that puts securing the profits of big business first, the regimes of both Cameron and May have emphasised the need for voluntary measures. For example, allowing big business to reformulate products to be 'healthier' in their own time.

May's proposals left out a number of suggestions that Public Health England believe will have the most impact. For example, banning advertising of food high in salt, fat and sugar during family programmes. Or banning special offers on junk food in supermarkets.

This type of measure would have cut across the profits of the companies involved - who lobbied hard for them not to be included.

The only measure to attempt to force companies to act is the sugar tax, which was announced some time ago (see 'Condescending sugar tax debate misses real causes of poor diet' at socialistparty.org.uk). This will not come into effect for two years, in which time manufacturers will be encouraged to reformulate products to avoid the tax.

But under capitalism, companies will always try to use the cheapest products to generate the most profits.

Reformulation only guarantees less sugar, not necessarily that the product will be healthier. Moreover, this only targets individual products high in sugar like soft-drinks - but sugar is present in many other processed food products.

'Clean labelling' (for example purporting no artificial additives) has become the latest effort of the food industry to make ingredients we would otherwise jump away from sound natural and nutritious on labels.

Some things don't even have to be listed on labels - like processing aids. In reality, we have a limited knowledge of what goes into our food - shown clearly by the horsemeat scandal. The only way we will really know is by workers and consumers having democratic oversight on the production process.

The cost of healthy food is a major barrier. A survey carried out at Leeds University showed that less than 2% of children's lunch boxes meet the nutritional standards set for school canteens.

Rising food costs are clearly a big factor - both in terms of what parents are able to pack from home and in who can afford school dinners. This was highlighted by the recent example of a free school threatening to put children into 'lunch isolation' with a very minimal lunch as 'punishment' for parents being late paying exorbitant amounts for 'lunch fees'.

The money raised from the sugar tax is due to go towards helping fund breakfast clubs and an extra half hour a day of physical exercise at school. But if these things are necessary, why leave it to a tax where the amount raised is unknown? And schools are facing budget cuts as it is. Improvements in some school provisions can be undermined by cuts in others.

Cuts are having a similar effect on local government-run leisure centres, many of which have closed or been contracted out with higher prices charged. Working long hours, or multiple jobs, in order to make ends meet because of stagnating wages makes accessing such facilities even more difficult.

How are people supposed to increase the amount of exercise they do if the opportunities to do so are being removed? How are we supposed to eat healthier if all we have time for is a takeaway or a ready meal?

The Tories' measures are attempts to put sticking plasters (of very poor quality) over the inequities of capitalism which give rise to these issues. By putting profits above all else, capitalism messes with our health and wellbeing.

Limited time to exercise, poor diet, stress and many other issues result from our lives being bent to fit the capitalist machine. Instead we must fight for a socialist society which is able to fully harness knowledge, science and resources to meet the needs of the majority.

A socialist programme to tackle these issues would include: