A film about power, the organisations who wield it and the people who fought back 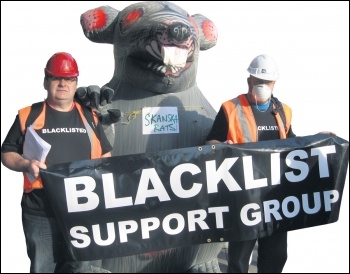 "No justice! No Peace!" rings out from a megaphone-wielding Dave Smith in the middle of a flashmob protest in Oxford Street, with the banner of the National Shop Stewards Network (NSSN) in the background. This is the opening scene of the new documentary 'Blacklisted - a film about power, the organisations that wield it and the people who fought back'.

The film by Tom Wood from Reel News was premiered at the 'Blacklisting, Bullying & Blowing the Whistle' conference that took place in the University of Greenwich starting on 16 September, where speakers included Shadow Chancellor John McDonnell alongside blacklisted workers.

It follows on from the book co-authored by Dave Smith and investigative journalist Phil Chamberlain - 'Blacklisted: the secret war between big business and union activists'.

The film and the updated book also bring into view the role of the state in colluding with the bosses as well as the undercover policing which is the subject of the Pitchford Inquiry.

The predecessor of the Socialist Party, the Militant was targeted by police in this way along with the blacklisted workers, environmental and anti-racist campaigners.

Blacklisted workers open up about the suffering they and their families faced over decades of being excluded from the industry. Brian Higgins compared it to being "like house arrest" because of the lack of money.

The film exposes how the major construction company Sir Robert McAlpine Ltd spent £20,000 in creating the 'Consulting Association' which kept a list of known union activists that workers would be checked against for a fee.

Over 40 companies used the 'service'.

Steve Acheson explained how he hadn't been phoned by any agency for ten years. Often, these workers were targeted for merely being health and safety reps, which of course cut into profits.

John Bryan remembered how one company had employed a 'heavy' to try and intimidate union reps - "I am Mal... Animal." However, he subsequently lost a finger through working unsafely!

The association was raided by government officials in 2009 after being tipped off by a whistleblower. But it took a further seven years to get anything that looked like justice after a heroic campaign from the blacklisted workers and their supporters around the Blacklist Support Group, which was set up in the aftermath of the raid.

The historic £75 million settlement won by the workers and their unions - Unite, Ucatt and GMB - represents a huge victory but is only a fraction of what is really owed in terms of lost wages over years and decades. The fight for real justice, to secure employment and unionise the sites is still ongoing.