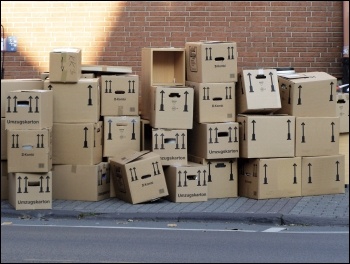 Almost 50,000 renters said landlords had thrown their belongings into the street, photo by Erich Ferdinand (Creative Commons)   (Click to enlarge)

A million renters are suffering at the hands of 'rogue landlords', finds a report for housing charity Shelter.

A huge proportion of the UK's 4.3 million private renters have had landlord experiences that could be found unlawful in court. Of course, when you fear for the roof over your head, legal action doesn't seem much of an option.

The report states more than 64,000 renters have had their utilities cut off by landlords. Almost 50,000 said their belongings were thrown into the street by landlords during disputes. And at least 600,000 said landlords had entered their home without permission.

It does raise the question: why are these landlords described as 'rogue' - as if they are rare exceptions - when bullying and law-breaking is so common?

Thatcher abolished much of the protection previously afforded to private tenants. Through the long winter of Tony Blair's rule, these rights were not restored. In fact, New Labour compounded the situation by continuing council house sales, along with 'stock transfer' of whole estates.

Inheriting this housing catastrophe are people who have no choice but to privately rent - and thus face these Wild West practices.

Housing could be the issue which propels Jeremy Corbyn to power. The crisis is now endemic. A rapid council house building programme, plus establishing tenants' rights like rent control and secure tenure, could capture the popular imagination.

The Socialist Party campaigns for these policies. They could build a movement capable of cutting through right-wing press lies, and ending the housing crisis once and for all.