A weekend of discussion and debate 12 & 13 November - Central London 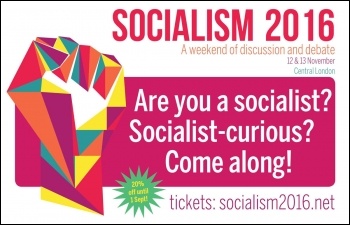 With bias in the establishment media so widespread, many people turn to social media for their real news and to share updates on workers' and young people's struggles.

But nothing beats discussion and debate with other activists to tease out the multitude of questions that face us in this turbulent political time. How can we unite a movement against the Blairites and the bosses? How do we overcome the challenges of the 'gig' economy? How can we help the junior doctors win and save the NHS?

Movements and campaigns are springing up and provoking important questions about how we fight back - from #BlackLivesMatter, to discussion around identity politics, to how we defend migrants' rights.

"Technology cannot substitute for direct human interaction". Don't take our word for it - this comes from the Forbes magazine survey of more than 750 business executives - ie people who only spend money on meetings if they think it's worth it.

So the first thousand reasons for coming to Socialism 2016 will be the 'direct human interaction' with over 1,000 other socialists, socialist-curious, working class fighters, Corbynistas, anti-austerians, trade unionists, anti-racist campaigners, and others. There will be two fantastic rallies but most of the weekend will consist of workshops and discussion forums where everyone gets a chance to speak.

There are thousands of other reasons to come. We need to discuss what the alternative to capitalist crisis and everlasting austerity is - as well as how we can achieve it.

And after the victory of Jeremy Corbyn what kind of a party do we want - what is the model for anti-austerity Labour? What is the role of new technology in democratic organisation?

Other key themes will include Trotskyism in the 21st century, Militant's real history and a 'Bitesize' series of 50-minute workshops on some of the fundamentals of socialism for school and college students.

You should come to Socialism 2016 because it will be an event crammed with discussion and debate on all this and on the most important question in the world - how we can change it.