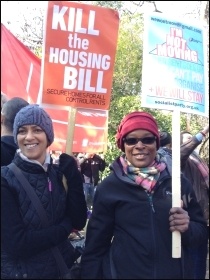 This third residents' meeting was once again organised by the Trade Unionist and Socialist Coalition (TUSC) and chaired by Dave Mitchell, who earlier that day had been interviewed by Look North and the local radio stations.

During one interview he had been mistaken for a Shoreline representative and pelted with eggs! After some discussion with the resident, Dave was able to carry on with the interview.

With questions repeatedly being asked about the bedroom tax and how it will affect residents if they were to move into two or three bedroom housing, the biggest concern for Shoreline was clearly a lack of one bedroom housing within the Immingham area, with social housing at an all-time low.

The 'consultation' deadline has now passed. The next residents meeting will elect a committee based on at least one rep from each of the 18 blocks, who will organise the next stage of the campaign to resist demolition and fight for alternative social housing in the Immingham area.