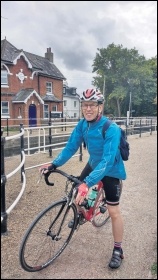 A sponsored bike ride from London to Cambridge by Chris Newby and Naomi Byron has raised well over £340 so far, with more donations expected.

West London Socialist Party members hosted a celebration of the 200th edition of Socialism Today, the Socialist Party's magazine (see advert page 5). A fighting fund collection at the event raised £116, a sum matched by the coins collected by Sharon Dixon from her sales of the Socialist.