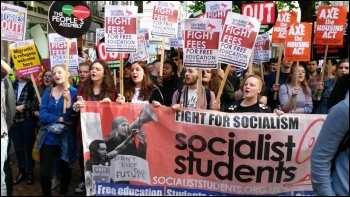 Socialist Students on the protest photo Alistair Tice, photo by   (Click to enlarge)

Thousands took to the streets of Birmingham on 2 October to 'take back Brum' and demonstrate against Tory party conference starting in the city the same day.

The march kicked off with a rally during which Socialist Party activist and Public and Commercial Services Union (PCS) Vice-President John McInally addressed the crowd bringing support for Jeremy Corbyn and saying: "Let's get this clear, it is not bullying and it is not intimidation to call for mandatory re-selection of MPs. That is nothing more than a basic democratic demand.

"Being an MP is not a career for life, and those who say they want to represent the Labour movement should be accountable to the Labour movement. And just imagine if those MPs fought the Tories with the same determination that they are fighting Jeremy and John McDonnell."

On the protest itself, a very loud and lively Socialist Students contingent demanded an end to tuition fees, which could be raised even higher by new legislation being brought in by the Conservative government.

A Socialist Party public meeting took place at the end of the demonstration and was attended by around 50 people, many at their first meeting. The discussion ranged from Tory attacks and their effects in the workplace and in society to the battle in the Labour Party and what Jeremy Corbyn needs to do to defeat the Blairites and build a 100% anti-austerity party to take on the Tories.