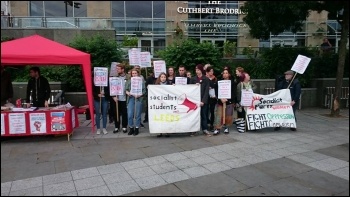 Socialists in Leeds called on the Irish government to repeal the 8th Amendment to the Irish Constitution at a city centre solidarity protest on 27 September.

The amendment bans abortions and is the focus of a campaign by Rosa (for Reproductive rights against Oppression, Sexism and Austerity) a campaigning group set up by Socialist Party members in Ireland.

Protest organiser Amy Cousens spoke about the injustice of this sexist policy, giving examples of women who had suffered greatly as a result. Maddy Andrews, equality and diversity officer at Leeds Beckett student union and Tannis Belsham-Wray, a Socialist Party member, also made speeches about the need to fight for the abolition of the 8th Amendment. They explained how cuts to social and welfare budgets are further punishing women.

Iain Dalton, West Yorkshire organiser for the Socialist Party, concluded the protest with a speech further emphasising the links between oppression in society and austerity which is perpetuating inequality. He went on to discuss recent attempts by the Irish government to introduce water charges as an example of the wealthy few forcing the poorer majority to pay for the their mistakes through crippling austerity measures.

Yorkshire socialists stand with Rosa and Irish women to repeal the 8th Amendment and allow women to take back control of their reproductive rights.