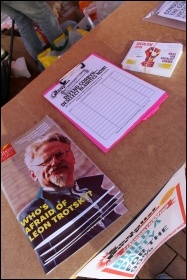 Addressing the gathering, editor Lynn Walsh stressed its importance in providing a thorough Marxist analysis of events and a guide to action for the workers movement, and the struggle for socialism.

Lynn's speech was made just a few hours after Jeremy Corbyn's re-election as leader of the Labour Party. Forthcoming issues would show what was needed now to develop Labour as an inclusive, democratic, and campaigning socialist organisation.

A woman living in Streatham, originally from Serbia, attended because it was the only event advertised on the internet that that was going to discuss Corbyn's election.

Also, Socialist Party finance organiser Naomi Byron explained the importance of fundraising, which the party relies on. She concluded with a financial appeal which raised £116. This was doubled by the coins collected by Sharon Dixon from her sales of the Socialist.