Why I joined the Socialist Party: "My only regret is I didn't do it years ago" 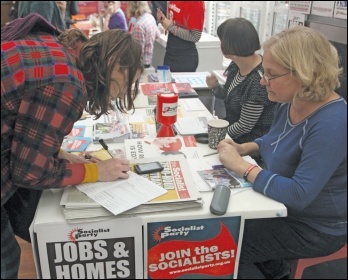 I'm a new Socialist Party member at the grand old age of 67. I was a member of local government union Unison for years as an activist and branch secretary.

Each time I went to conference I heard motions put forward by Socialist Party members that resounded with my views. But I was 'guided' by those more experienced and in a higher position than me away from the Socialist Party.

But after my retirement and not feeling pressured by the union staff, I had contact on Facebook with Socialist Party member and Unison activist Paul Couchman. I enjoyed seeing his posts.

I signed up to the Socialist Party email list and when Jeremy Corbyn was elected Labour Party leader again I contacted Paul to ask if I could go to a Socialist Party meeting.

I want to be active in helping Jeremy Corbyn get the Labour Party back to what the Labour Party was initially started for. To support the workers and the vulnerable, to ensure policies are formulated for the greater good and not the privileged few.

I attended the meeting and I felt in the company of like-minded people.

Paul gave me a load of information together with a membership form. I read the booklets and decided I wanted to be involved rather than just sit on the side lines so called him and met him four days later with my membership form.

If you can relate to what the Socialist Party stands for - fairness, equality and socialism - then contact us and have a discussion. If you don't, you will never know.

I may be an old joiner but my only regret is I didn't do it years ago.