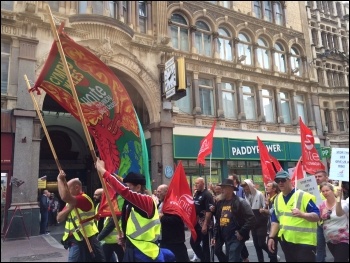 Corbyn needs allies to take on the Tories and big business, but he's making a big mistake if he thinks he can count on most Labour councillors.

At Labour Party conference he applauded Cardiff's Labour-run council for not outsourcing Cardiff Bus, the main bus company in the city.

But it was less than a year ago that members of general union Unite at Cardiff Bus were forced to engage in prolonged strike action against poverty pay. While hundreds of drivers and other workers massed on picket lines outside the depot, Labour councillor Ben Thomas called on them to stop being "greedy"!

Many cities complain about not having an integrated transport system. Cardiff Council is doing its best to rip theirs apart.

They've sold off the main bus station which is directly in front of the main train station, along with nearby land, for plush offices and the new BBC Wales headquarters. Local residents are tired of the councillors who bend over backwards for big business, but won't lift a finger to fight cuts to the services they rely on.

Just a couple of weeks before Corbyn made his speech, Cardiff's Labour council agreed to outsource its leisure services to notorious exploiter Greenwich Leisure Limited.

No doubt Corbyn sees extending the olive branch to Labour councils as necessary in order to pull the party back together. But he will have to realise he has a choice between uniting with councillors who cut and privatise services, or with the ordinary people who rely on those services and those who have fought to defend them.