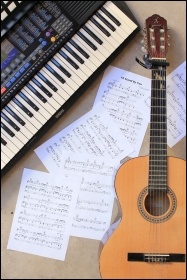 They say that you can tell a lot about a band by its name.

Kefaya is an Arabic word meaning 'enough'. It was the cry of the grassroots revolutionary movement in Egypt, a powerful symbol of the 2011 Arab Spring uprisings.

'Radio International' is Kefaya's first album, billed as "stories of migration, tales of musical encounters and sounds of resistance". It mixes music with snippets of spoken word as if you're tuning in to an alternative World Service.

The album features renowned artists from the traditions of Flamenco, Indian classical and Arabic music, brought together by two UK-based musicians, Giuliano Modarelli and Al MacSween. A guitarist and a pianist respectively, they founded Kefaya as an 'international music collective' in 2011.

Their primary musical influence is jazz, and this is evident throughout the album. It's largely instrumental, using electronic rhythms and effects to evoke mood.

The musical storytelling is at its best in a piece called 'Intifada'. Reflecting the ebb and flow of the Palestinian struggle against an aggressive Israeli state, an upbeat tune on the oud, a Middle Eastern string instrument, celebrates life and culture. Distant crowds chant, sinister sounds suggest helicopters or rockets maybe, giving way to silence.

My favourite track, though, is 'Bella Ciao', an instrumental version of the Italian anti-fascist anthem from the early 1940s. Check out Kefaya playing this classic at www.tinyurl.com/KefayaBellaCiao. This is definitely one for the campfire!

'Radio International' by Kefaya will be released on 14 October 2016 - for updates see www.kefaya.co.uk