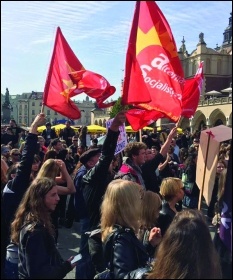 The restrictive existing law means that an estimated 150,000 women each year are forced to risk illegal abortions. The new law championed by right-wing prime minister Beata Szydło will jail women for up to five years for terminating a pregnancy, regardless of the reason.

The current anti-abortion law was introduced in 1993 in the early years of the restoration of capitalism in Poland under intense pressure from the Catholic Church, which was seen as a key pillar of support for the establishment of capitalism and the resulting rampant neoliberalism.

At that time about 70% of society was against the introduction of the abortion ban and supported the existing law, which allowed access to abortion "for social reasons".

Nevertheless, the ban was forced through, along with the introduction of religion in schools and the signing of the Concordat, which gave huge material privileges to the Church.

Socialist Alternative has con-sistently campaigned for women's right to choose and against the new law. More generally it has linked the fight for women's rights to a struggle against the governing right-wing coalition: to end poverty, defend workers' rights and the exploitative system of capitalism.