Link to this page: https://www.socialistparty.org.uk/articles/23725 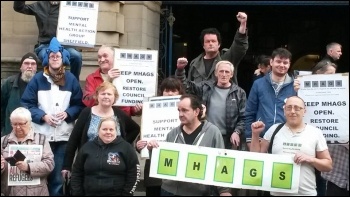 "If it wasn't for MHAGS, I'd be dead" was how Stewart shocked the council chamber. He explained that when he suffered his mental breakdown he would not leave his house, but after the help and support he got from Sheffield Mental Health Action Group here he was addressing the city council from the public gallery.

Around 25 service users came to protest and lobby the council over its decision to withdraw funding to MHAGS from April next year, threatening the continued existence of the group's day centre which provides companionship, food, activities and trips for around 250 people every year.

The Friends of MHAGS campaign has been started to fight these cuts. At the lobby outside the town hall, service users described what the group meant to them, and speakers from Unite Community and Momentum gave support. 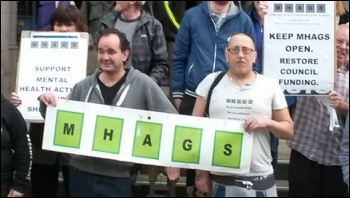 Inside, MHAGS founder and Socialist Party member Tim Jones gave an impassioned speech in presenting a 700-signature petition demanding the restoration of the meagre £10,500 annual grant, £3,500 of which is paid straight back to the council in rent.

Tim accused the council of marginalising MHAGS over the years by cutting its funding and now locating its day centre outside the city centre and up a steep hill making it inaccessible to many would-be service users.

In reply, Jack Scott, the Labour council cabinet member, acknowledged the work that MHAGS does, admitting that its volunteers save the council and the NHS hundreds of thousands of pounds a year. He also admitted that the council had it in its power to restore MHAGS funding but said that it would be unfair on other voluntary organisations.

In other words, because the Labour council passes on the Tory cuts, voluntary organisations have to compete against each other for a shrinking pot of money.

Service users left the town hall proud of their impact and determined to continue their campaign until the councillors' weasel words are turned into hard cash to keep MHAGS open.

This version of this article was first posted on the Socialist Party website on 7 October 2016 and may vary slightly from the version subsequently printed in The Socialist.