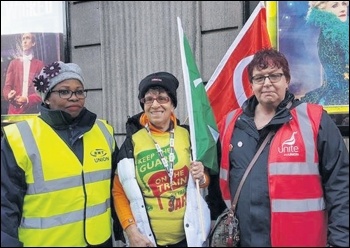 Socialist Party members joined RMT strikers at London's Victoria station on 11 October, the first morning of a three day walk-out on Southern Rail. The long-running dispute has been stepped up with further action planned on 18 October and dates in November and December. Mick Cash, the RMT's general secretary, said: "Despite all of the threats and bullying from the company, RMT can confirm that the strike action is rock solid and determined again across the Southern Rail network."

Managers for William Hill bookmakers across the country are set to lose up to £6,000 from their salaries as the company undergoes a restructure. While shop floor staff have been brought up to the Tory 'living wage' of £7.20, the companies' top managers seem to believe that this justifies sacrificing the pay of long-serving staff as the gambling market, like retail, is being squeezed.

This move has seen Unite the Union respond with a series of protests outside William Hill stores across the country on 7 October. In Leeds, protesters leafletted outside the shop on Boar Lane.

The protest got strong support from passing members of the public, several of who stopped to help us leaflet other people passing by. One former William Hill worker, who while passing offered their support, simply told us: "they're an awful company to work for." Workers in bookies like William Hill are put under a lot of pressure, handling large sums of cash sometimes with just one person in the store.

The Socialist Party supports Unite's attempts to organise these workers and gain a decent wage and working conditions.