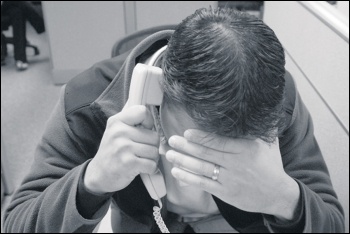 An anonymous Concentrix worker has spoken out against the firm. He highlighted not only the lack of training for its 600 staff, but also the high volume of desperate calls from people who rely and survive on tax credits. "People crying down the phone to you that they're down to their last bag of wipes, have no food in the fridge to feed their kids."

The Tories awarded Concentrix a £75 million contract to investigate potential fraudulent claimants. However, hundreds of low-income households have had their tax credits stopped without being forewarned, and without any time to refute the allegations.

Concentrix call centre staff have been at the receiving end of these highly stressful calls. The same whistleblower reported the company gives them no counselling or support. They are instead told to "have a smoke... you'll be fine" - and then expected to come back and deal with another 40 or 50 calls.

The Socialist Party demands the reversal of tax credit cuts, and of profiteering from public services. All workers should have proper training and support, backed up by trade union recognition to help hold management to account.

A £10 an hour minimum wage will ensure less people need to claim tax credits. And fund real living benefits for all as well.