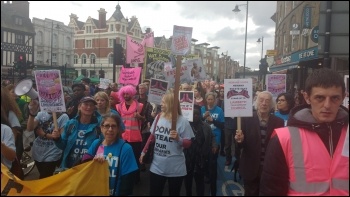 'Stand Up to Lambeth' campaigners marching down Clapham High Street in south London, 8.10.16, photo by James Ivens   (Click to enlarge)

The newly formed 'Stand Up to Lambeth' has the backing of nearly 30 different campaigns. These include estates the right-wing Labour council wants to demolish, and libraries it wants to turn into private gyms. The local branches of trade unions Unison and Unite also support the campaign.

Angry but upbeat marchers wore pink boots, tops and even wigs. The campaign's symbol is a pair of pink Doc Martens standing up to the Blairite council. The march threw pink glitter at the town hall's entrance as it passed. 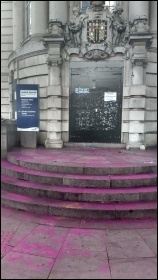 This effort to draw together the various campaigns against Blairite council attacks is an important development. Lambeth Socialist Party supports it fully, and takes part in organising meetings.

We joined around 200 others on the demonstration. This was a great turnout for the campaign's first event.

Speaking at the opening rally, we called for kicking the Blairites out of Labour and letting socialists back in. Then we can take on the Tories effectively, and push for mass investment in homes, jobs and services for all.

Unfortunately, Jeremy Corbyn has so far not responded to the campaign's appeals for support. This is a mistake. The Corbyn movement must push for unity with working class fighters, not Tory shills still clinging to Labour.

Lambeth & SW London Socialist Party: After the election - What next in the struggle for socialism?