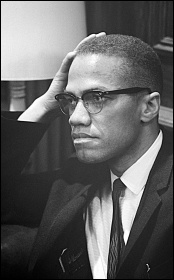 After reading 'The Autobiography of Malcolm X' I am left in awe.

I'm upset that I have only read it now at 25 years of age, and have sent a copy to my younger brother. This book is essential reading for the black activist and any socialist. Never have I read words more radicalising, or that have changed my perception of the world around me so much.

Malcolm Little was born in Omaha, Nebraska, in 1925. He articulates very well key moments of racism in his life - from his house being burned down as a child, to the little comments and judgements black people face every day. He talks of straightening his hair, and how many black people did this because of the deep-seated idea that anything black was bad.

This is what this book has helped me with the most: seeing oppression. Things I had never noticed before I notice all the time. Comments I would have never thought of as racist before stick out and jar against my ear. The book has helped give me the courage to respond.

To say the book is radicalising is not an exaggeration. The main fulcrum for Malcolm going from petty criminal to activist is an epiphany he has while in prison. The sum of the epiphany is "all white people are devils". These are extreme words, but they express the profound anger and alienation black people and oppressed racial groups can feel in racist capitalist society.

Malcolm retracts this later in life. He has a religious experience praying in Mecca with Muslims of all different races. Most importantly, he comes to recognise that in order to defeat racism, you need to defeat the capitalist system which created it and keeps it going. That means workers of all races and nationalities coming together against our common enemy: the capitalist class.

For me, as a socialist, I realise that racist ideas and behaviours start at the top. They are the result of a capitalist system that needs racism to stay alive, to justify slavery and the exploitation of poorer nations, and to foster false divisions between workers.

But Malcolm's political thought evolved throughout his life, and at the start he favoured black separatism over working class unity.

He writes, for example, of white people going to black bars - and, when drunk, saying clumsy things like: "I want you to know I'm not better than you, we're the same." He speaks of the arrogance of believing black people need to be told by white people we are equal.

It's true that in the current system, even some well-meaning people are sometimes going to exhibit racist behaviour. But capitalism exploits white workers too. Only by patient explanation - and most importantly, fighting side by side against capitalism and racism - can we can overcome these mistakes, and tackle their real cause.

I cannot recommend this book enough. As a black person fighting racism it has left me with a sense of pride and dignity I never had before.

Martin Luther King Jr said being silent is sometimes the worst thing you can do. Malcolm X's autobiography can give you some of the understanding to start breaking that silence. To speak up, and rail against the bosses, those responsible for oppression and injustice in every form. You can apply that teaching to race, gender, sexuality - and definitely the class struggle.

Bristol North Socialist Party: What are we facing after Brexit?

Bristol North Socialist Party: What is the Alt Right?