Link to this page: https://www.socialistparty.org.uk/articles/23780 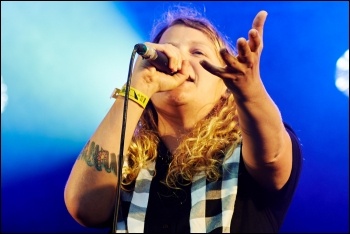 I've never really warmed to Betjeman. All rather conservative - the type of poetry you can imagine Ukip leaders rhapsodising about, when they're not too busy resigning or hospitalising each other.

The evening picked up with a reimagining of the journey from London to Glasgow made famous by Auden's 'Night Mail'. 'Railway Nation' featured five contemporary poets composing a poem each on a leg of the journey.

It was an interesting concept, well executed. The wonderful Liz Berry was the highlight on her trek north from Birmingham through "the Black Country's surprising green and blue" and "the secret nettled heaven of the allotments".

The highlight, though, was the live performance of Kate Tempest's new work 'Let Them Eat Chaos', recently released in both book and album form. It truly is an amazing work.

It takes as its theme seven individuals in one street in south-east London, awake at 4.18 in the morning, "counting sheepishly their mistakes". Tempest's polemic captures modern-day Britain, unsurprisingly erring on the darker, more isolated side:

And these are the only times you have known.

The carer, the late night reveller, the PR guy - a track each, a poem each within the larger piece.

Esther's worried about the world tonight.

She's worried all the time.

In fact she don't know how she's supposed to put it from her mind.

That is the lead-in to 'Europe Is Lost' - which goes on to say:

It's big business baby, and its smile is hideous.

Your kids are doped up on medical sedatives.

The music, a rapidly changing and occasionally stark hip-hop or electronic backing that aficionados will know from her previous recorded work, complements the work perfectly. The show is available on BBC iPlayer until 31 October - catch it, then buy the album.

This version of this article was first posted on the Socialist Party website on 17 October 2016 and may vary slightly from the version subsequently printed in The Socialist.