Link to this page: https://www.socialistparty.org.uk/articles/23781 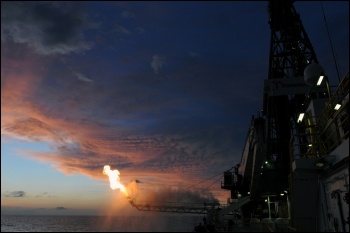 Deepwater Horizon is a disaster pic for real. The film dramatises the BP-leased oil rig that exploded in the Gulf of Mexico in 2010, killing eleven crew members. The subsequent vast oil spill caused the worst environmental disaster in US history.

The clear message of the film is that the oil giant's reckless drive to complete the costly drilling operation led to safety negligence and catastrophe.

BP has criticised the film for not spreading the blame to the rig operators, Transocean, and contractor Haliburton which poured the concrete well casing.

However, the courts decided that it was profit-driven BP which called the shots and therefore was '67% responsible'. BP was subsequently fined $20 billion - the largest corporate fine ever.

The script is fast and full of techno-babble. For someone not from the southern states, trying to follow the heavily accented dialogue is difficult - and Malkovich's character's accent is just weird! Nonetheless, it's clear what's happening and the crew's panic and pyrotechnics of the rig blowing up are very dramatic.

'Big oil' will continue to risk lives and the environment in search of profits. On 2 October a BP rig leaked 95 tonnes of oil into the North Sea.

Only by nationalising these corporate giants, as part of a democratic, socialist plan of production, will it be possible to phase out the use of hydrocarbons by investing in safe and sustainable energy.

This version of this article was first posted on the Socialist Party website on 18 October 2016 and may vary slightly from the version subsequently printed in The Socialist.

Beyond the Pale - capitalism and the environment