Link to this page: https://www.socialistparty.org.uk/articles/23782 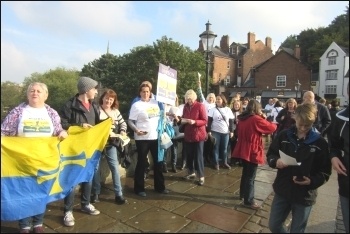 Durham City Council is proposing to sack 2,700 teaching assistants (TAs) and then rehire them on 23% less pay.

At an event in Durham City centre, which was to raise awareness of the attack on them, teaching assistant Lisa Turnbull talked to the Socialist about the impact of this proposal and their struggle against the Labour controlled council. 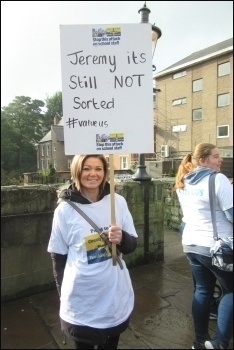 "It's the utter devastation, made worse by the fact it's a Labour council. I've been brought up to believe that Labour is for working people.

"It's impacting on people's health, their relationships, finances - some have had to sell their houses.

"The campaign is taking up everything. When my daughter wants to meet me she has to come along to these events!

"If these cuts are implemented I won't be able to help finance my daughter through university and will really struggle to pay my mortgage - that's after 26 years of service.

"We won't accept this at all. We've grouped together as County Durham TA Activist Committee. We are a completely self-organised grassroots campaign."

Teaching assistants have felt let down by their trade unions. Lisa commented:

"Dave Prentis [Unison general secretary] finally came up to Durham to speak to us - he promised way back at the Miners' Gala [in July] that he would come. He has now promised to throw the full financial backing of the union behind us."

Teaching assistants standing next to us were sceptical of Prentis. Certainly TAs will have to ensure pressure is kept on him to fulfil his commitment to back them.

Lisa ended by saying: "Regardless of everything we are going to fight this!"

This version of this article was first posted on the Socialist Party website on 19 October 2016 and may vary slightly from the version subsequently printed in The Socialist.