No solution on basis of imperialism and capitalism 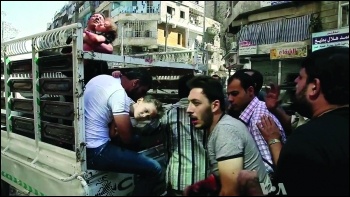 Having promoted a bloody sectarian war in their efforts to dislodge the Russian and Iranian-backed Syrian regime of President Assad, the Western powers are hypercritically bemoaning the plight of Syrian civilians caught in the deadly crossfire. A recent ceasefire of belligerents negotiated between the US and Russia fell apart barely before the ink had dried, with the US and UK governments now calling for new sanctions against Russia and Assad's regime. As Sami El-Sayed, of the Socialist Party (CWI in Ireland), explains, none of the ruling classes involved are capable of resolving the Syrian crisis. Only the working class internationally has the potential to securing lasting peace and economic development.

Over the past five years, Syria has endured a civil war of terrible brutality and human suffering. It is partly a sectarian conflict, fuelled by outside European, US and Russian powers, all vying for influence in the region. Also in the mix are the interventions of regional powers, such as Iran and their allies Hezbollah, on behalf of the Assad regime. Saudi Arabia and Turkey act on behalf of predominantly Sunni rebel factions.

The death toll, to date, is estimated to be well over 400,000, mostly civilian deaths, inflicted by the merciless tactics of the Assad regime, backed by Russian military might, military strikes by Western capitalist powers and reactionary Islamist forces, such as the so-called Islamic State.

The international media fixation on Isis's mass executions and terror tactics fails to mention financial and logistical support given to Islamic terror groups from the Erdogan government in Turkey, as well as the financing and arming by Saudi Arabia and other Gulf states.

The Syrian war, its spill over into neighbouring Iraq and the inability of the US to reign in its allies in Turkey and Saudi Arabia, illustrate the growing weakening of US imperialism. The so-called 'moderate' rebels backed by US imperialism have failed to gain traction. Soon after the war's beginning, the al-Qa'ida affiliate, Jabhat al-Nusra and Isis gained footholds in Syria and Iraq.

The narrative of the Assad regime's imminent collapse bore no fruit. Russia's direct military intervention has gone a long way into propping up the regime and solidifying the Syrian Army's position, giving the Assad regime a new lease of life. This has given rise to the possibility of Assad remaining in power, in some form, in whatever new order emerges.

Some continue to praise the so-called 'secularist' nature of Assad's rule. But Assad continued the tactics of French imperialism before him, of 'divide and rule', playing the religious minorities, on which he bases his rule, off against the Sunni majority.

Nothing portrays the brutality of the war as much as the current offensive by the Assad regime against rebel forces in east Aleppo. As it stands, the regime has the military advantage of the Russian airforce to supplement its own aerial attacks. This has seen the bombing of schools, hospitals and other civilian targets to weaken the morale of the defenders. According to the UN, nearly 400 civilians were killed in Assad's September offensive.

The rebel counter-offensive to relieve besieged forces in the east of the city has largely ground to a halt. It is expected that a serious blow will be struck against the rebels, though this would not be the first time such predictions have been made and not borne out by events.

The bloody conflict cannot be solved on the basis of military might alone. There is a real possibility of the war grinding to a halt, in a sectarian stalemate.

This would see some territories dominated by Shia and other minority religious groupings that are controlled by the regime and the remaining territory controlled by various Sunni and Kurdish rebel factions.

There is no solution to this conflict on the basis of the rule and domination of imperialism, capitalism and landlordism in the region. This economic and social order can only provide a future deepening conflict, poverty and sectarian division.

There exists a powerful working class in countries such Iran, Turkey and Egypt that can play a decisive role in challenging the rule of capitalist-landlord regimes in the region, such as those of Assad, Erdogan and other rotten dictatorships.

Allied with the poor and oppressed such a movement has the capacity to lead a struggle to take the vast resources and wealth of the region under public ownership, democratically planned to meet the needs of all.

A strong working class alternative must be built so that such a socialist vision of the Middle East can come into being.