Get organised to win the battle both inside and outside Labour 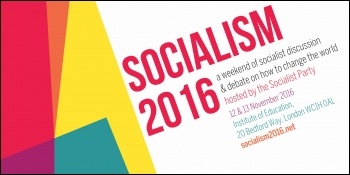 This crisis driven capitalist system is not working. The world is in turmoil. Inequality is increasing - 62 people own the same wealth as half the world.

High rents, low wages and ever increasing debt are frequent words that millions of us are familiar with.

Austerity continues to strip us of our vital services and make us compromise on our basic needs.

More and more of us are saying enough is enough and are looking for an alternative to this system that serves only the interest of rich elites.

Socialism is back on the agenda. Even right-wing politicians are forced to talk about the 'working class' and pose themselves as against cuts. But this rhetoric is just that - meaningless words when their actions continue to attack workers and young people.

Socialist ideas are increasingly being searched for and on 12-13 November in central London these ideas will be discussed and debated at Socialism 2016 - an inspirational weekend, with packed sessions on a wide range of issues.

Come along to discuss the civil war within the Labour Party and how we can win a socialist, anti-austerity, democratic party that represents our interest. There will be discussions on the civil war in Labour, the role of the Trade Unionist and Socialist Coalition, examples of building left parties internationally and loads more.

Socialism 2016 will discuss ideas on how to get organised to win the battle both inside and outside Labour. From housing, to defending refugees, to Trotskyism, to socialist ideas in bitesize - there is a session for all. Come and join more than a thousand other people in solidarity and struggle.

A weekend of discussion and debate