A disaster that should never have happened 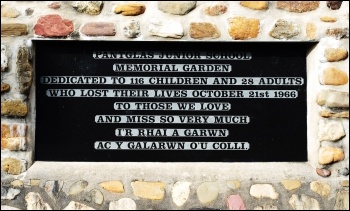 Aberfan - it's a name as resonant with tragedy for working class people in South Wales as Hillsborough is for Liverpool. For many the horror is all the greater because 116 of the 144 who died were young children. Like Hillsborough, Aberfan was a disaster that need never have happened.

The coal waste tips that towered above Aberfan were a common feature of the Valleys, but the local children playing here noticed that the tip above their school was shifting ten yards a year.

Adults noticed too. On 24 July 1963, over three years before the disaster, the borough engineer, DCW Jones wrote to the local official in charge, "...the National Coal Board (NCB) appear to be taking slurry similar to that which... gave so much trouble in the quarry at Merthyr Vale, up on to the... tip at the rear of the Pantglas Schools... I regard it as extremely serious as the slurry is so fluid and the gradient so steep that it could not possibly stay in position in the winter time or during periods of heavy rain."

DCW Jones wrote urgent warnings to an array of officials as the months passed. Meetings were held - and deferred - as individuals went on holiday. Decisions were put off. The tips still loomed and shifted.

One letter is headed, "Danger from coal slurry being tipped at the rear of Pantglas School, Aberfan".

The colliery manager writes: "A satisfactory and suitable place other than the tip... eludes me at the moment..."

In another letter we read: "We would not like to continue beyond the next six to eight weeks in tipping on the mountain side where it is likely to be a source of danger to Pantglas School."

A culvert was repaired, but the slurry kept coming. Then, at 9.15am on 21 October 1966, a huge portion of the tip broke away and rushed like a tsunami down on Pantglas Primary School, where morning lessons had just begun.

John Sztucki - who grew up to be a miner at Tower Colliery - was in the third form at the secondary school 200 metres away where classes started later: "There was a group of us in the playground - six or seven of us - waiting for the bell to go.

"It was so foggy you couldn't see ten yards. We heard this horrible roaring noise and we thought a jet airplane was about to crash into the mountain. We climbed out over the wall of the school up onto the old railway line. There was all this muck - ooze - flowing below it.

"Between the canal bank and the railway line ran a crevasse, about 50 metres deep at one end, tapering off to almost nothing in front of the primary school. Our school had the crevasse in front of it, so a lot of the muck went in and more or less filled that. Whereas the primary school was covered.

"We couldn't get there because of the muck coming down. We could just make out through the fog where the houses should have been between the two schools, but they weren't there any more. There was just total confusion.

"The miners were called out of all the local collieries - Merthyr Vale, Deep Navigation, Taff Merthyr, Abercynon. My father was one of them. They were all up on the school trying to shift this muck out of the way. People who were known to live in Aberfan were called out of their workplaces to go home immediately.

"One of my best friends was one of the lucky ones who were dug out. He was buried up to his neck in slurry. I was in a little gang of friends and we realised that half of us - six or seven - were gone."

In the valleys all around people left work, grabbed a shovel and rushed to Aberfan to help the emergency services with the rescue effort. Less welcome were the hordes of journalists.

The attention of the world was on South Wales, but Lord Robens, the head of the NCB, went along to his installation that afternoon as Chancellor of Surrey University. He didn't show up in Aberfan until the evening of the following day.

Like other heads of nationalised industries, Robens had a boss's arrogance - and a Daimler, an executive aeroplane and a flat in Belgravia to go with it. When he finally reached the site, he denied that anything could have been done to prevent the disaster. He told the press "natural unknown springs" had brought down the tip. Only at the end of the 76 day enquiry did the Coal Board admit responsibility.

The Davies Tribunal concluded that the NCB's liability was "incontestible and uncontested", but no one was sacked or prosecuted - and Robens refused to allow the NCB to remove the tips above Aberfan.

Labour Prime Minister Harold Wilson refused Robens' resignation. Robens was carrying out huge cuts to the coal industry without any major strikes - something the Tories could never have managed. Perhaps Wilson felt he couldn't afford to let him go.

The NCB paid out a total of £160,000 compensation (just over £2 million today), and the Aberfan Disaster Fund raised £1.75 million. Wilson's government raided that fund to help pay the costs of removing the tips - money that was only returned after Labour's win in 1997.

Today the 50th anniversary commemorations shun any mention that Aberfan was not an accident. That is a grave mistake, because the tip would not have fallen had there been legal regulations for siting, constructing and maintaining it.

In the aftermath of Aberfan, the National Union of Mineworkers and other trade unionists redoubled their efforts to win a culture of "safety first" in industry and the wider community. Those safeguards are now under threat from Tory cuts - egged on by a press that ridicules "health and safety gone mad". Our memory of Aberfan must keep us vigilant.