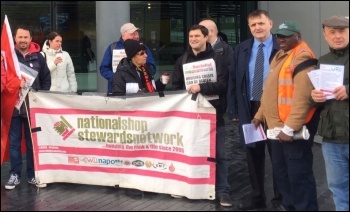 London Underground (LU) cleaners protested outside the London mayor's office on 13 October. Our pay and conditions are being attacked by the private contractors employed by London Underground. The RMT is demanding that Sadiq Khan brings cleaning back in house.

Station cleaners are losing £3,400 a year because their working week has been cut from six days to five days. Yet they have been told to clean up to four stations a day. Before they were cleaning one or two.

In-house LU staff get sick pay and free travel. Cleaners are employed by contractors and get no sick pay and have to pay, not only when they travel to work and back, but also between stations to carry out their duties. This can cost £100 a month. The contractors often short pay the staff, and harass and bully them. The RMT is fighting to unionise the cleaners and demands a £10 an hour minimum wage.

At the protest I made the point that every night the cleaners in the depots work really hard to get the trains immaculately clean for the city stockbrokers, so they can travel in them without soiling their five thousand pound suits.

The cleaners are also having to help customers, because the ticket offices have been closed and station staff are busy helping customers on the tickets machines. We hope the mayor will listen to the plight of the cleaners, end the contracting out of cleaning staff and bring them back in house.