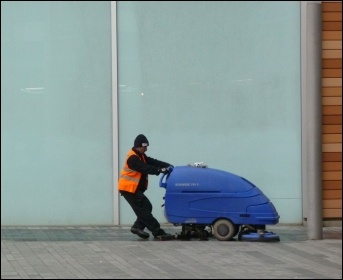 Socialist Party members and other trade unionists took part in a march and rally in Barnsley on 15 October in support of school cleaners, the 'Kinsley 3', who have been on strike for over six weeks.

The dispute started in April this year when their school moved from the control of Wakefield District Council and became Kinsley Academy.

Although they had nearly 30 years' service between them the school gave the cleaning contract to C&D Cleaning, a Barnsley company. C&D abolished their sick pay agreement, cut their holiday entitlement and cut their pay rate from £7.85 an hour to £7.20.

But this doesn't take into account the time they don't get paid for and other complications of having to clock on and off over the telephone. Their actual take home pay has been cut by about 25%.

When Unison tried to negotiate on behalf of the cleaners C&D said that they didn't recognise Unison and would not negotiate with them. If C&D get away with treating workers in this way it will open the floodgates for other rogue employers to do the same.

It is important that we give all the support we can to these workers.

Donations to the strike fund can be sent to Wakefield Unison, 18 Gills Yard, Wakefield, WF1 3BZ.