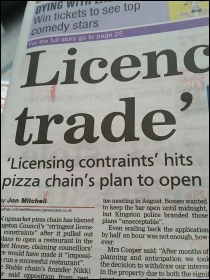 National Union of Journalists (NUJ) members at local daily papers published by Newsquest in the south of England have taken five days of industrial action against the company, beginning on 13 October. The source of the dispute is cuts to staffing, which have already prompted seven reporters to resign.

Newsquest is a subsidiary of Gannett, a US media firm, which has a dark history of strong-arm industrial tactics, including sometimes-violent strike-breaking attacks on writers' and printers' guilds which would make even a Wapping-era Rupert Murdoch blush.

In keeping with that industrial tradition, Newsquest management, led by hard-headed CEO Henry Faure Walker, refused to consult staff about these cuts. Management's tactics backfired however. With Acas talks exhausted, on 17 October members voted for a further five days of all-out strike action.

A Newsquest south London chapel spokesperson told me: "The company's repeated cuts are going to cripple true local journalism not only here but across the country. Profits boosted by cutting experienced and committed staff are shipped to Gannett in the US, meaning oversight of public officials and politicians is basically subject to that conglomerate's whim."

The Socialist Party stands in total solidarity with the NUJ and its striking members at Newsquest.