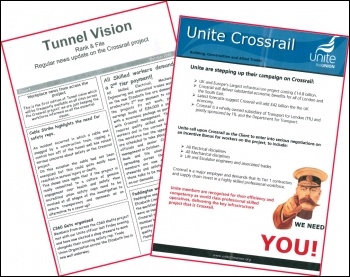 With management saying that the project is 80% completed and desperate to complete the electrical jobs on time, workers realise that now is the time to put demands to the bosses - direct employment, improved facilities and health and safety, as well as a second tier productivity bonus payment.

This at a time when managers and senior engineers are earning six-figure sums!

This was the biggest show of strength by 'the sparks' since the victorious struggle in 2011-12 to defeat the Besna contract, which the big electrical contractors wanted to impose and would have seen wages cut by 35%.

Since then, workers have been fighting the use of agencies and 'umbrella companies' and other varieties of bogus self-employment which are used by companies to cut wages.

This is why during the early days of Crossrail, a succession of union activists were blacklisted from the job. This included Frank Morris, who was reinstated after a six month campaign and has since been elected to the Unite executive committee.

It was clear from the meeting that a new and increasingly younger layer of electricians are being mobilised by Unite and its rank-and-file activists and have now launched a new bulletin for the sites called 'Tunnel Vision' (see above).

There have already been instances of unofficial action or 'cabined up' (staying in the cabin instead of working) on sites.

I was able to speak to give the support of the National Shop Stewards Network (NSSN) and to remind the meeting about victories that have been won over the last few years and the potential to achieve a breakthrough now on Crossrail.