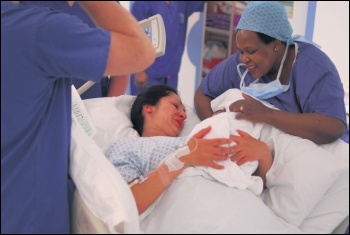 Cuts and sell-offs mean midwives are increasingly unable to do their jobs properly, photo by Salim Fadhley (Creative Commons)   (Click to enlarge)

The Royal College of Midwives recently published a survey that highlighted why a growing number of midwives were choosing to leave the profession.

For half of the midwives surveyed who had already left, low staffing levels had driven them out of the NHS. The other half had left because they felt they were unable to provide the quality care that they were expected to deliver to mothers and babies they were responsible for.

These two issues are clearly linked. In an understaffed environment your workload increases, but the time you are afforded to do your job properly does not - it is impossible to provide quality care in these conditions.

I work in a busy inner-city London hospital. We far-exceed our capacity as a unit, meaning more babies are born than space allows. And yet we manage.

The anecdotes that have been in the tabloids recently are not exaggerated or embellished. On shifts when numbers are down, midwives really are expected to look after nine, 12, sometimes 15 women, plus their babies, who unfortunately do not count as "patients".

When babies can be on two-hourly infection observations, IV antibiotics and three-hourly blood sugar checks, it is astounding that they still don't class as patients in our workload.

On nights like these when staffing is particularly bad, midwives are forced to prioritise the tasks that, if not performed, would pose a threat to life, and unwillingly neglect the seemingly trivial issues that new motherhood involves.

Maternity units are like conveyor belts - ensure the safe delivery of the baby, ensure the absence of infection and ensure they are sent home as soon as possible so that the next woman can be brought in.

Mothers therefore go home in a healthy state and in a timely manner, but once home can be unable to feed their babies, simply because the midwives have had no time to sit with them and teach them how to breastfeed.

In the UK there is currently already a shortfall of at least 2,600 midwives, and considering the 'exodus' that is expected if conditions in maternity do not improve, this is deeply concerning.

The cuts imposed by the Tories and the inadequate funding allocated to maternity services is demoralising midwives to the point of retiring and putting the lives of working class people in danger.

The Tories have failed to protect the NHS and are purposefully underfunding it in order to declare it not fit for purpose. This makes it easy to convince the public that the only way to make the NHS great again is to privatise it.

The Royal College of Midwives trade union continues to fight for fairer pay, safer staffing levels and better working conditions for its staff, but without the support from government, midwives and mothers will continue to suffer.

We need a socialist government that will put the lives of its citizens and workers, not the profit that it can reap, at the heart of its healthcare model.