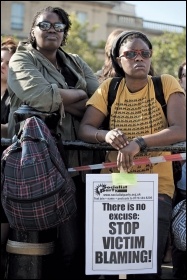 The police and justice system have a long record of institutional sexism, including blaming victims for the attacks they suffer, photo by Paul Mattsson   (Click to enlarge)

I have been watching the news around the Ched Evans rape case in utter horror.

This case confirms the biggest fear of victims of sexual assault: that your sexual history could be plastered across a courtroom in minute detail if you dare to speak up. Meanwhile, Ched Evans's sex life seems totally unimportant.

What's more worrying is that this case has relied on a former partner of the victim giving details of her sex life as 'evidence' against an unrelated crime. The Ched Evans case also shows how wealth and influence can help quash your conviction.

One barrister told us that in lawyers' inner circles, when they have to defend someone accused of rape, they consciously demonise the victim - calling the technique "sluts and nuts".

It's hugely offensive, but totally believable, that if they can't use a woman's sexual history to falsely invalidate her claims, they use her mental health.

This is my rewrite of the sixth verse of the Elvis Presley hit 'In the Ghetto', to update for the current wave of police violence.

Then one night in desperation

A young man breaks away

He don't buy a gun

He don't steal a car

He don't try to run

But he still don't get far

In the recent debates about Brexit, apart from the Tories' dog-whistle pronouncements on immigration, nothing seems to have caught the mood like Tesco pulling Marmite and other Unilever products from its online store.

The spat between supermarket and supplier revolves around the fall in the pound, and Unilever demanding an increase of 10% in prices to compensate for increased costs from imports.

Tesco, on one hand, has pointed out Unilever didn't lower their prices when the pound was up. Meanwhile, it is just a few years since Tesco was exposed for systematically squeezing its suppliers.

While some have argued over which company is more immoral, I prefer to reflect on the fact that I have stood on picket lines with both Unilever and Tesco workers, as their employers sought to attack their pensions and jobs.

Instead of siding with either big business, let's remember that what drives both is maximising profits at the expense of both workers and consumers.

Our response to that must be to demand that such vital companies for supplying foodstuffs to millions are taken out of the hands of the few, and brought into public ownership under democratic workers' control and management, so we can make use of their resources for the benefit of all, not just the wealthy few.

Theresa May has told the head of the NHS that it will get no extra money, despite rapidly escalating problems that led to recent warnings that hospitals are close to "breaking point".

The previously 'promised' £10 billion extra - which doesn't cover what is needed to run the NHS anyway - will now not be provided. Instead May has said this has to be found in 'efficiency savings' - that's cuts to me and you.

But this language removes us from the reality of what this means for the man and woman on the street who will ultimately be affected by this. It means closing departments like A&E or maternity, or even whole hospitals like Liverpool Women's or those on the Wirral.

Plans have been leaked in a document that is also named in a sanitised way: "Sustainability and Transformation Plan". Again, to you and me, "sustainability" will equate to job losses and Jeremy Hunt imposing unworkable contracts for the nurses, doctors and healthcare staff, leaving these people who care deeply about the services we use left with no choice but to strike. "Transformation" would appear to mean selling off all that remains attractive enough to people like Richard Branson and his Virgin Care, which runs those services for a profit, putting money before our wellbeing.

There is already a massive strain on things like support services. If you go to get blood tests done, they won't necessarily be processed at the hospital you are at. Instead, now labs will be 'centralised' - meaning that one hospital, for example, in a region, will have that service, and your samples will be sent off to that lab, then you have to wait for the results to come back.

Now I don't know about you, but I wouldn't call that "efficiency". I'd call that watering down the excellent standard of the NHS that we have known and loved. I'd say that it's pretty important that, when you're ill, the doctors can get to the bottom of it as soon as possible.

These plans are being rushed through. They are to be decided on by 23 December. It's not a lot of time, and we can't sit back and let this happen. There is no time to wait for a general election to get the Tories out - we need to act now, make our voices heard before there is nothing left to save.

Let's organise a fightback in the traditional Scouse fashion: loudly! It's our NHS, built by our families, paid for from our hard work, and what it has given us is worth fighting for with every ounce.

On 14 September, I and other Socialist Party members and campaigners took part in a lobby outside Leeds City Council to support a motion I presented in a deputation to council.

The motion calls upon the council to change the licensing rules for bars and clubs in Leeds so that they must clearly display consent-educational posters, and staff must be trained on consent. The motion was passed unanimously, and I will now be negotiating with the council on how to take this forward.

Leeds Socialist Party's support was visible, and it was the only party that expressed solidarity with the motion, as well as Unite Community members. The event was covered by the local press and has had a good reaction so far.

While this is a small reform, it is a win for victims of sexual violence in Leeds.

When members in the sunny resort of Torbay in South Devon met in September, we were chaired by a striking junior doctor. We did not have a traditional introduction to our discussion, and instead had a sort of "what the papers say", picking out articles and letters from the latest issue of the Socialist.

The Hinkley Point article was discussed, along with the feature on the Labour Party, and the report from Greater Manchester of the threat hanging over the firefighters.

Everyone agreed it was a great paper doing a very big job, and wanted all the comrades working on it to get a big thank you. One of the members, who had not sold any papers before, said: "Give me five, and I'll make 'em buy them!"

We are confidently planning to plant the palm tree of socialism in the English Riviera.

In the cold and rain it hits you just how many more homeless people there are these days in places like Torquay. Young, old, women, men, many still children.

They are in cold, wet doorways and benches, usually alone. No soft clothes or heating on. No one to give them a hug and say it will be all right. Cold, wet, depressed, tired and hungry all because they can't quite manage to keep up with the relentless rat race.

Not much of a crime is it? But what a punishment. And yet capitalist society seems to blame these lost souls for their own demise. Often fleeing abuse or a hideous past towards the streets as services can't cope.

This misery is rooted in a broken system that creates broken people.

Let's all get out and fight for socialism, because in a socialist society everyone is treated equally and fairly.

Waltham Forest Socialist Party: Young people and the fight for a future in austerity Britain