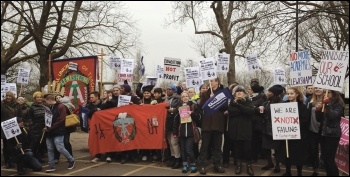 Teachers and students successfully struck against 'academy' status in Lewisham, south London, in 2015, photo by Socialist Party   (Click to enlarge)

The new Tory government under Theresa May will continue converting state schools to 'academy' status and setting up new 'free schools'.

This, along with May's drive on new grammars, illustrates a determination to remove power from local authorities, replacing them with unaccountable private bodies.

The BBC recently got hold of figures suggesting 113 academy trusts in England have run up debts of almost £25 million.

And this, it seems, is the tip of the iceberg. The academies project has allowed unscrupulous businesspeople to redirect huge amounts of public money out of schools into their own pockets all over the country.

Meanwhile, the Observer found in 2015 there were two claims of "financial irregularity" against academies and free schools every month. There were 58 allegations in the three years from 2012.

Some have resulted in convictions for fraud. The Perry Beeches Academy Trust, which runs five secondary schools in Birmingham, paid nearly £1.3 million to a business which then paid a "second salary" to one of its headteachers, Liam Nolan.

Sajid Husain Raza is the former headteacher of Kings Science Academy in Bradford, West Yorkshire. His sister Shabana Hussain, a teacher at the school, and Daud Khan, its former financial director, were convicted of a total of 15 charges by a jury at Leeds Crown Court.

And there has been the saga around the 'irregular' financial dealings of Sir Greg Martin, former head of the Durand Academy Trust. He was knighted for his services to education and lauded by Education Secretary Michael Gove.

Academy Trusts behave like big businesses. They pay their headteachers huge salaries - figures in the hundreds of thousands are considered normal. Meanwhile, they ask staff living with pay freezes to reapply for their own jobs due to 'budget constraints'.

This situation is clearly not sustainable. We must stop academies and free schools. Fight for high-quality, fully funded, publicly owned and run schools, under the democratic control of staff, parents and the community.