Link to this page: https://www.socialistparty.org.uk/articles/23866 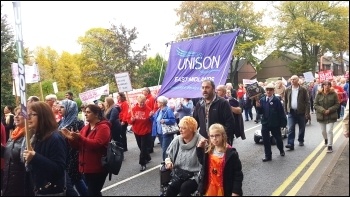 Around 6,000 people marched through the centre of Grantham, east Midlands, in defence of their A&E unit on 29 October. The "temporary" night time closure has people rightly up in arms as it has been extended already. The trust claims that the reasons for doing so are health and safety related, due to there not being enough doctors.

Gary Freeman, Chair of the Unison South Derbyshire Healthcare branch and health service group executive member, gave his support and solidarity to the campaign. He and others pointed out at the rally that it is hardly a coincidence that this decision was made with the so-called 'Sustainability and Transformation Plans (STPs)' looming in the background.

Gary called for opposition to all cuts and said he would be campaigning to support the national demonstration called for March 2017 and would call for Unison's health service group executive to support it.

Leaflets calling for a linking up of the campaigns across the country were well received and a public meeting is being held in Grantham by the Socialist Party on how to widen the struggle.