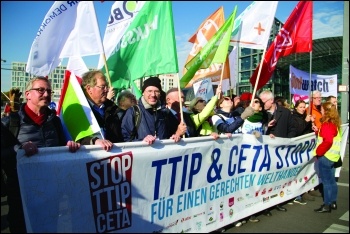 The saga of the on-off-and-on again trade agreement between Canada and the European Union (EU) holds important lessons for how Jeremy Corbyn and his supporters could use the Brexit negotiations to build a European-wide workers' opposition to the EU bosses' club.

The Comprehensive Economic and Trade Agreement (CETA) between Canada and the EU has now been signed, at a hastily re-arranged ceremony for the Canadian premier, Justin Trudeau. But this was only possible after the federal government of Belgium, the only EU member state yet to approve CETA, was forced to agree a last-minute four-page 'interpretation' of the treaty with the country's regional parliaments.

Opposition to CETA had come in particular from the self-governing parliament of Wallonia, with a government coalition led by the Socialist Party (PS), one of Labour's sister parties in the European parliament.

Like the proposed EU Transatlantic Trade and Investment Partnership (TTIP) with the US, CETA threatens consumer safety, environmental protections and workers' rights, and generally enhances the power of big business over democratically-elected governments.

The EU Commission is approaching the coming Brexit negotiations with the intention of 'punishing Britain', as 'an example to others'. In reality, however, there will be no such thing as 'an EU position' but the different positions of 27 capitalist nation states - and the working class in each of those states.

In times of economic growth it has been possible to achieve unity among the 'capitalist thieves'. But smoothing over the problems caused when one or another section of the capitalist class in a particular country have not had their interests met in treaty negotiations, is more difficult in an era of stagnation.

The Wallonia PS had to at least appear to make a 'left' stand against CETA because, as the Guardian noted (29 October), it was "under pressure" from the left-wing Workers' Party of Belgium (PTB/PvdA), "which is making inroads into Wallonia, a region of above-average unemployment".

It is the working class, with no permanent interest in capitalism, which has the greatest possibility of reaching a common position - on socialist terms for trade arrangements with Canada or on Brexit - if a bold lead is given.

A Labour Party thoroughly transformed into a socialist, anti-austerity workers' party, committed to democratic public ownership of the economy and defiance of the pro-market, anti-worker and austerity-driving EU institutions, could play a pivotal role in building such unity.

After the recent EU summit Jeremy Corbyn was reported to be "inviting left-wing leaders from across Europe to an alternative meeting on Brexit in London" (Guardian, 21 October).

Why not propose its scrapping as a negotiation 'red line' for a new relationship with the EU? And the abandonment of TTIP talks with the US, the end of the austerity-driving European Fiscal Compact, the write-off of the Eurozone debts, etc?

But who could Jeremy appeal to in order to fight for such a programme? The Belgian PS, which ultimately went along with CETA, or the PTB? The Irish Anti Austerity Alliance-Socialist Party TDs (members of the Irish parliament) being persecuted for opposing water charges, or their persecutors, the Irish Labour Party, who faithfully implemented the EU's austerity dictates?