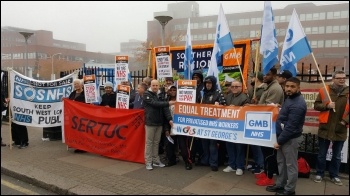 Scandalously, two of the union reps have been suspended by the company. It is apt that the first strike was on the very day that the trust was placed in 'special measures'. Email messages of support to infoso@gmb.org.uk and post donations to GMB Southern Region - GMB Southern: Cooper House, 205 Hook Road, Chessington, Surrey KT9 1EA photo Rob Williams