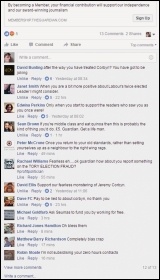 The Guardian, house newsletter of the Labour right and hypocritical zero-hour-contract employer, has been trying to attract 'members' again.

For £49 a year, you can take part in democratic decision-making and help elect the newspaper's editorial board. Just kidding. In fact, the only "benefits" the Guardian lists are a "welcome pack", "premium" app and "regular member emails".

The liberal rag's latest sponsored ad on Facebook invited readers to "support our fearless, independent journalism". Here are the initial responses to that...

Some users piled onto the RMT for striking to save skilled guards' jobs and protect passenger safety. But many laid into Southern's incompetent, profiteering management instead.

Time to get back on track. Tweet @RMTunion & tell them how rail strikes make you feel. #SouthernBackOnTrack

@SouthernRailUK @RMTunion fully behind them. You, southern rail, are the issue. Not the union.

.@SouthernRailUK Have you been running one of Europe's most delayed and ineffective train services, all year, because of strikes?

.@SouthernRailUK Have I been more delayed this year than the rest of my life put together - on non-strike days - because of strikes?

The taskforce existed to make recommendations to Fifa, and bosses claim there will still be ongoing anti-racist initiatives. But many believe the decision speaks to a certain light-mindedness on fighting racism in the sport.

This includes former taskforce member Osasu Obayiuwana. He said that "the problem of racism in football remains a burning, very serious and topical one, which needs continuous attention.

"I personally think there remained a lot of very serious work for the task force to have done - the 2018 World Cup in Russia being one such matter. But it is evident the Fifa administration takes a different position."