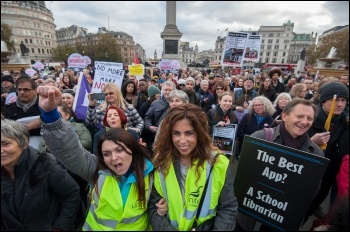 Culture sector workers and campaigners marching against cuts and sell-offs of libraries, galleries and museums, 5.11.16, photo by Paul Mattsson   (Click to enlarge)

"Don't make a bonfire of our culture", read the PCS banner that led the 5 November demonstration against cuts and privatisation in museums and libraries. Over a thousand people marched through central London, including culture sector workers and library campaigners and a contingent of French workers organised in the CGT trade union federation. Greenwich library worker and Socialist Party member Sara Kasab spoke at the end rally in Trafalgar Square:

Greenwich Unite members in libraries have taken eight days of strike action so far this year to defend the library service. Our policy in Greenwich has always been to fight every cut - no matter how small.

This year we took action to defend our mobile library. This service provides books to schools and nurseries and last year issued 30,000 books - and yet it was seen by Greenwich council to be old fashioned and an easy target.

Our action wasn't just to secure an alternative and protect staff if the council decided to cut the mobile - it was to show councillors that we will fight every proposed cut to our precious library service. I have been a library worker for 36 years and I expect that there are many people like me here today. People who have spent most of their working lives in libraries because they love libraries.

We welcome the news that Jeremy Corbyn supports our movement and it's great that he wants to invest in arts and culture and public services. But we can't wait until 2020 Jeremy. We need Labour councillors like in Greenwich to stop closing and privatising libraries now and we call on Jeremy Corbyn to support that stand.

As well as crucial community campaigning we need trade union action - national action by unions in this sector.