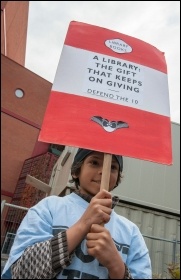 Walsall council, in one of the poorest areas of the west Midlands, is closing 15 of its 16 libraries. Sadly, this is just one of many examples of ruthless cuts which will deny young people a future.

The way children have been taught to read at schools has significantly changed over the past 20 years. However, it is still children from poorer backgrounds who are more likely to struggle with reading.

Libraries are a free resource which allow children to improve their literacy outside of school, regardless of their background. In cutting funding to libraries, it is children from less well-off backgrounds who will lose out the most.

As a child, most of the books I read were from the library. Without this, it is likely I would not have learnt to read so quickly and, as a result, I would not have done as well at school or got into university.

Cutting funding to libraries is not the only way the government is preventing pupils from poorer backgrounds from achieving their full potential. It is also cutting the money available to provide teaching assistants to support children who struggle with reading. Schools are required to give evidence of how they help pupils who need extra support to achieve their potential.

However, instead of providing the funding for pupils who need it, the government is making cuts which mean that these pupils lose out and putting pressure on teachers to close the gap. Meanwhile, the proposal to bring back grammar schools will only widen the equality gap further, demoralising a generation of children and denying them a future.

Labour runs Walsall council in coalition with the Liberal Democrats. This shows that we need Labour councillors who fight cuts, not close libraries.